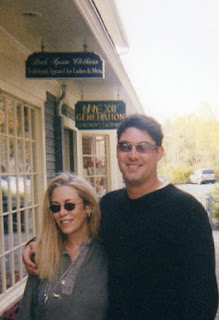 Tim White, predicate felon, career criminal, child porno freak, drag queen, the "man" (and I use the term very, very loosely) that Al Martin dubbed the Cross-dressing Conspiracy Theorist, has come up with a new conspiracy theory: That Barbara Hartwell is a "CIA BLACK WITCH".
For the past nine (9) years, I have been called that "CIA BITCH". Now, I guess White and his fellow stooges have decided I'm a witch. Why else would I "defend a Satanist"?
Let's start with the header from Tim White's message, sent to Bob Levin, FBI whistleblower whose reports I recently began posting on my site.
BLACK WITCH CIA BARBARA HARTWELL DEFENDS SATANIST MICHAEL AQUINO
Below the header, Tim White copied my report.  As if to suggest that the report is evidence of my "defense" of a "Satanist".

Ted Gunderson's Outrageous Lies Refuted by Target, Michael Aquino
Now...out of the realm of Tim White's delusional conspiracy-theorist paranoid  fantasy world. Here are the facts.
Fact #1) I did not "defend" anyone, including Michael Aquino.
Check the post: no defense there, only some statements of fact re Gunderson's regular tactic of targeting various individuals with libelous falsehoods.
Fact#2) I simply posted a report written by Michael Aquino, which refuted the lies of Ted Gunderson.
Whether or not he is a "Satanist" is completely irrelevant. He could have been the butcher, the baker or the candlestick-maker. The fact remains that libel is libel, regardless of the occupation or the "religion" of the target.
Fact #3) My purpose in posting Michael's Aquino's report was very simply to present another piece of evidence that Ted Gunderson is a liar, that he has (once again) fabricated stories about a target, to serve his own agenda (whatever that may be) and that of his COINTELPRO cronies.
The post was about exposing Ted Gunderson. Michael Aquino was simply one of Gunderson's targets. I don't know why Gunderson targeted him for these lies, nor do I care. My only concern was presenting more evidence, to add to the large body of evidence I have already collected, over a period of years, which shows that Ted Gunderson is a liar.
So, if in the intellectually-challeged mind (?) of Tim White, this equates to Barbara Hartwell being a  "CIA BLACK WITCH" who is "defending a Satanist", then he may believe anything he chooses, but by publishing such absurd theories, he only further exposes his own stupidity. But then, Tim White never was the sharpest tool in the shed, so else what can one expect?
But unfortuntely, the stupidity doesn't end with Tim White. Now, a new half-wit (at least new to me) has joined the ranks of the government stooges and intelligence groupies...one "Michelle Ray". I'll make a note of it and add her to my list of  accomplices to the criminal conspiracy.
These perps are like roaches...where you see one, you know there are a hundred more breeding in the darkness. Every once in a while, another one comes out of the cracks in the wall....
Here's what Michelle Ray, the adoring fan of the demonic duo (Tim White and Todd Fahey) and toady to their moronic  shill, "Xena Carpenter" has added to the libel campaign against Barbara Hartwell. My comments follow.
GOVERNMENT STOOGE MICHELLE RAY LIBELS BARBARA HARTWELL

From: Michelle Ray
Oh Boy...based on the last couple of e-mails concerning the Hartwell issue...website with her garbage posted on it REMOVES her SPEW (thank you and right on!) it is becoming VERY CLEAR...Pandora's Box has gone from lifting the lid and peeking in...to splayed wide open and the shit is going to spew.

It didn't take her (Hartwell) long to call in her "markers" and get a new site up...the gloves appear to have come off...and all players are setting up their battle lines.

I am sickened that Aquino would step into the ring...harping on things like a misspelled name...from an article originally published in June of 2000...this is 10 plus years after the fact and he is just NOW reading the article (yeah right).

Then to bring the issue of Johnny Gosch AND Sherry Jackson into play..."they" are going straight for the Christian jugular and stepping immediately into the very center of the beginnings of this satanic cult.

Seems to me...a very central and key nerve has been struck... to go this quickly to the core of the issue...as usually the game is played by dancing around your opponent first... to see what punches they have.  Here NO time has been wasted in BHP calling in the BIG GUNS.

The gloves have come off...you and others are in for a battle to say the least.  By removing BHP libel from that website...you have drawn first blood.  To say that these monsters will fight for their lives is an understatement.

Evil hates the light being shone upon true character and comes up swinging...every time.  However...in that sense...you ALREADY know where you stand - and as "they" have ALREADY pulled the "Big Punch" the rest is annoying endless swings that miss...and will only serve to exhaust as defense's are hammered out...and finances depleted in trying to preserve the facade that "they" have spent years building.

I spent a short time before work the other day...going thru some of the "spew" from the Google shutdown and BHP's response - I had to laugh at her "Demonic Duo meets Xena Carpenter" blog of enlightment.

I immediately had this vision of you [Tim White] and Todd flying...red capes flapping behind as you swoop down over the sleepy little unassuming towns and villages of America...dropping seeds of evil and Xena looking up gazing with love and awe (Lois Lane) cheering you on...MY GOD...this story line really is from a comic book.

Is this the best that Hartwell can produce.  And her ending lines of having to live with out EVEN the basic needs in life so as to get her website back up and paid for out of her own pocket???  Wait a minute here...HER pocket???  From the money she is begging for...wouldn't that make it the pockets of her brainwashed cash donor's???

I have seen the pic's Hartwell posts on her site...nice clothes...expensive dark sunglasses...long blond hair blowing in the breeze...appears to be well fed...strolling the pricey markets arm in arm with her son.  Doesn't EVEN compare to the heartbreaking scenes I see on the streets of downtown Denver...REAL people who TRULY live everyday without basic needs being met.

Guess we all need...as Xena put it so well...one of those "big shiny donation buttons"...isn't life grand.

Get the BITCH...take her down and her minions will have no other choice than to fall along with her...a big pile of steaming stinking shit.
MORE TIRESOME IDIOCY REFUTED BY BARBARA HARTWELL
Well, it should now be clear why I called this Michelle Ray a half-wit. But stupidity isn't her only problem. Far from it. I am referring to the fact that she not only supports, promotes and defends known criminals like Tim White and Todd Fahey (for which reams of evidence has been furnished, not only by Barbara Hartwell, but by other legitimate people they have targeted for their crimes against persons); she also gleefully advocates censorship by the government.  (Google/NSA)
I also see that this spiteful, lowlife character, Michelle Ray, has the same penchant for crude and disgusting language shared by her gutter-trash pals, Fahey, White and "Xena Carpenter".
They certainly are birds of a feather (noisome vultures, that is). Or, wait, no.....perhaps it would be more fitting to liken them to a pack of rabid hyenas, vicious and filthy animals, foaming at the mouth, with no redeeming qualities, none at all. And they do attack in packs, due to their cowardly nature.
And for the moronic Ms. Ray's edification, Aquino's complaint was not at all about a "misspelled name." That was just an aside. The ISSUE was libelous falsehoods fabricated and published by Ted L. Gunderson. Again, the stupidity of these stooges is truly astounding.
Re Sherry Jackson and Johny Gosch, which she tries to tie in, but fails to establish relevance. Fact is, there is none. I am a Sherry Jackson supporter from way back (before she went to prison); Sherry is also my Sister in Christ. And I will continue to support her as best I can, in whatever ways I am capable, just as I have always done.
And I have been writing about the Gosch case as a journalist, since 2005, when I had particular reason to be concerned with exposing Ted Gunderson's exploitation of that case for his own agenda. The fact that Tim White (a minion and stooge of Gunderson and DeCamp) was being used to promote disinformation about the case made it even more compelling for me personally, that the truth about this criminal network be exposed.
If Michelle Ray wants to talk about "Evil", I think it would  behoove her to direct her attention to the demonic characters she's hanging with. But never mind...she doesn't have the mental firepower, and certainly not the spiritual discernment, to begin to grasp what is the true nature of evil.
Re the "comic book" story line: "Xena Carpenter" is the one displaying the moronic cartoon character on her website; she is also the one who writes the semi-literate comic book prose.
So why try to pin that on Barbara Hartwell? That's obvious: It's because buffoons like these always, always twist things around to accuse their enemies of whatever may be their own crimes, offenses, stupidity, etc. etc.
My "nice clothes"? Take a closer look, fool. But I guess if you like military surplus (hand-me-downs at that) you could make a case for that. Anyway, military surplus are my kind of garments.  They're cheap, they're durable and they're comfortable, so it works for me....
As for the "expensive dark sunglasses", how would this imbecile know that? For all anyone can tell from the photo, they could be a $5.00 special from Woolworth's. Just more wild speculation here, anything to paint a picture of Barbara Hartwell as privileged and "well-fed", laughing all the way to the bank....
The rest of the idiocy she spews is really not worth commenting on, since again, the stupidity of it rings loud and clear for all with ears to hear. Just another pretentious loud-mouthed and belligerent ignoramus  with an axe to grind...a dime a dozen, and there are unfortunately many more where she came from.
Lastly, Michelle Ray will assuredly suffer the consequences of her last statement (directed to predicate felon, criminal stalker Tim White) which I consider a direct threat: "Get the BITCH"
Considering the company she keeps, I have to take the intent of that threat seriously. Both Tim White and Todd Fahey have already threatened my life, and police in several states have that on record. I also have witnesses and other documented evidence.
Now, it's only a matter of tracking down this "Michelle Ray" and filing another complaint with the police.
Since I've got her e-mail address, it shouldn't be too hard to do.
What else can I say? Another day, another stupid, malignant government stooge...
By their fruits shall you know them.
Barbara Hartwell Percival
March 12, 2010
FOR THE RECORD: TIM WHITE'S CC LIST FOR ORIGINAL MESSAGE:
Barbara Hartwell Percival
Legal Defense & Research Trust
PO Box 7487
Ocean Park, Maine 04063
Barbara Hartwell Vs. CIA
http://www.barbarahartwellvscia.blogspot.com
Posted by Curriculum Vitae at Friday, March 12, 2010