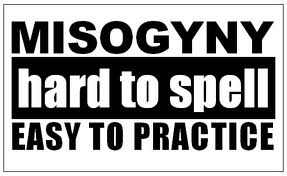 Misogynists (male supremacists) are cut from the same cloth as racists, bigots, white-supremacists. They hate --and fear-- anyone (in this case, women) who refuses to knuckle under to their tyranny. They are cowards and bullies.

Here is the latest email from Michael Donohue- that satanic, spineless, racist, misogynist, atheist, zionist ass kisser, wanna-be Knight of Malta's latest email.  He is pissed because of his small endowments. Talk about a coward-- this idiot takes the cake!  If he was ever a cop, which is questionable, he gives law enforcement a bad name. If this sissy-boy was supposed to defend the people, they would be in big trouble. If the police department ever hired him, his job would be to sit behind a desk and answer the phone as a switchboard 9/11 operator. But I doubt he would be qualified for that position--Too much multi-tasking for this narrow minded demonic imbecile!
I have reported him as a conspirator to the FBI and the Oregon Police Department in the stolen blackmail extortion video by Lindenbach and Alma C. Ott that he keeps elaborating on as "those videos". God has Karma in store for this pedophile protector and his creepy "friends" for all the heinous crimes against children that they are involved in. These phoney "bible believer" criminals can keep attacking us, but God is blessing us because of the good work we are doing to help the children and enlighten the people to the truth.


Love,
Sherri
MICHAEL DONOHUE TO SHERRI KANE
I was never speaking with you, but attempting to have a conversation with Horowitz until you butted your way in as his handler.  I have no desire to correspond any further with any of you because Len lacks the courage to debate with anyone, but it's very understandable knowing the jesuits and knights of malta have some kind of handle over him.

You just confirmed the suspicions I alluded to when I attempted to discourse with Len.  Have a nice life cause God is going to deal with you in ways I wouldn't even attempt to describe!!!

You were never on a mailing list and I don't belong to the Donahue family and never did and nothing you could say would ever impune my spotless law enforcement career.

I reall don't care what kind of game you are playing Horowitz and so stop harassing me with your bogus concoctions to someone else who cares, but I'll give you this you do well to demonstate the  jesuits MO, but once you have served your purpose they will dispose of you!!!

We have told you to stop harassing our family and yet you still continue to do so. This email from you clearly shows that you are a racist, woman hater.

Please explain these sentences, " YOU ALWAYS SEEMED TO BE A LEARNED MAN WHO COULD SPEAK FOR HIMSELF WITH THE AID OF SOME BLONDE BIMBO, AND NOW YOU HAVE THIS FOUL MOUTHED BITCH SPEAKING FOR YOU RATHER THAN YOUR IMPASSIONED HONEST PLEADING WITH THE PUBLIC."  The ball is in your court, please don't let a female be the spokesperson of your position."

Who the heck do you think you are!!  You don't even know me!
This "blonde bimbo' has now exposed you and all of your friends, which is why you all hate and fear me.
How embarrassing for you-- misogynist ignorant fool!

This clearly shows your lack of respect for your own mother.
Imagine how she would feel if she knew you thought of women like this?
Imagine how the women in your family now feel that you feel this way about women?  And then on top of it you label women that you have never even met, "bimbos."
You do not know me or my fiance personally and you have no right butting into our personal business.
You have aligned yourself with white supremacists--Alma Ott, Alex McGowin Studer, Ken Adachi, Craig Oxley and Eric Jon Phelps, Timothy Patrick White and Todd Brendan Fahey, all working under the former late FBI Director, Ted Gunderson, who worked under J. Edgar Hoover in CIA/FBI/NSA COINTELPRO operations. These agents have been attacking us for years, with lies and you are just parroting them. All because we expose government corruption.
I bet the Donahue family did not know this about you.  They have all been notified on this email. Now you have become an embarrassment. They all now know what kind of creep you really are. I am sure that not one of them would want a busybody women hater butting into their private lives. From here on now, they will never view you the same way!

Sherri Kane
MICHAEL DONOHUE TO LEN HOROWITZ
There was a day years ago that I believed in the great intensive work that Horowitz had done and published about AIDS and Ebola,etc.   WHAT HAPPENED TO YOU HOROWITZ???  Did the jesuits and vatican get to you with offers you couldn't refuse???  YOU ALWAYS SEEMED TO BE A LEARNED MAN WHO COULD SPEAK FOR HIMSELF WITH THE AID OF SOME BLONDE BIMBO, AND NOW YOU HAVE THIS FOUL MOUTHED BITCH SPEAKING FOR YOU RATHER THAN YOUR IMPASSIONED HONEST PLEADING WITH THE PUBLIC.  Something is wrong with this picture. I don't suppose you still live in Sandpoint,ID where the folks wouldn't approve of your current image profile with this bimbo.

IF YOU HAVE ANY BALLS LEFT YOU ONLY WILL TAKE THE TIME TO DEBATE ERIC PHELPS ON LIBERTY RADIO LIVE WITHOUT THE BIMBO, AND PLEAD YOUR CASE.  I HAVE LISTENED PHELPS LONG ENOUGH TO HEAR HIM BE FAIR TO HIS GUESTS INSPITE OF WHETHER THEY AGREED OR DISAGREED, BUT ME THINKEST YOU DON'T HAVE THAT MUCH COURAGE AS THERE IS LITTLE SUBSTANCE TO YOUR ISSUES.

I THINK YOU WOULD BE SHOCKED TO FIND THAT PHELPS IS NO THE EVIL MONSTER YOU AND HER ARE ATTEMPTING TO PORTRAY AS!!!

IF INDEED YOU ARE THE COURAGEOUS MEDICAL INVESTIGATOR THAT YOU USED TO PORTRAY YOURSELF AS BEING, THEN YOU WILL JUST SHOW UP ON A BROADCAST AND LET GOD SORT OUT THE DETAILS.

HOWEVER, I THINK YOU WILL LISTEN TO THAT BABBLING BIMBO, WHO HAS LITTLE TO OFFER LISTENING TO HER, AND WILL OPT FOR THE COWARDLY WAY OUT!!!

OH, I HOPE AND PRAY FOR EVERYONE INVOLVED THAT  I'M WRONG ABOUT YOUR DECISION FOR COURAGE???
Dear Dr. Horowitz:

Again I apologize for the script and intensity for my eyesight.  I wouldn't bother to attempt to recontact you if I didn't think it was well worth it for everyone's cause.  YOU HAVE TO REMEMBER THAT I was police officer for years and I'm sorry my typing is so feeble, but it didn't change how well I viewed you and Ms Kane on those videos to know what I do about you.   The ball is in your court, please don't let a female be the spokesperson of your position.   MY BROTHER LENORD, PLEASE GO BACK TO WHO YOU WERE IN SANDPOINT WHEN I DISCOVERED YOU!!!!!!!!!!!!!!!!!!!!!
SHERRI KANE TO MICHAEL DONOHUE
What a joke coming from a cowardly sheep pedophile protector with no gonads who sucks up to Eric Jon Phelps/Craig Oxley--the controlled opposition COINTELPRO Zionist/Vatican NSA employee(s). You and your friends will surely get your karma.
This "delusional pitiful bimbo" has blown the lid off the "conspiracy" movement along with Horowitz and another fearless amazing woman, Barbara Hartwell, to reveal what kind of crap it all is, and all you can do is rant like a little bitch.
Wahhhh..Wahhhhhh!
MICHAEL DONOHUE TO SHERRI KANE
you are a sick person and should be locked up for being so delusional!!!!  you would almost be comical if you weren't so  pitiful!!!  you sound like raving lunatic that escaped from the assylum!!
LEN HOROWITZ TO MICHAEL DONOHUE
Michael,
I do not know what kind of alcohol you are imbibing, weed you are smoking, or why you hate Kane.
I still work for God spreading truth, and the greatest truth--Jesus' LOVE in 528--an assignment that began in Clark Fork, ID in 1998, with Dr. Puleo.
I am sorry that you do not vibe to where God and revelation, and Sherri Kane, has taken me.
Frankly, the idiots you seem to vibe to, who hate Kane, deserve the harshest judgment for their  pedophilia and racist rantings, "dividing the sheeple to conquer the flock," anti-Zionist crap, funded as "controlled opposition" by Zionists.
Your subject heading "Truth Be Exposed," is a lot of bunk, because if you were really into truth, you would applaud my collaboration with Kane exposing the truth about "Dr. True Ott," Timothy Patrick White, Erick John Phelps, and their handler, now deceased, Ted Gunderson.
The bull ___ they put me through, beginning in 2007, two years prior to my meeting Kane, having to do with this crap about my knighting, is sick and sinful, LIES, exposed royally by Kane and me.
Where were you then? Did you come to my defense like Kane did?
In fact, they finally recanted this lie due to embarrassment from Kane-- their stupid lies about my alleged alliance with Maltese knights and the Vatican. They recanted prior to having Kane demolish their websites, thanks largely to honest lawful citizens whose services and goodwill these criminals abused along with my great reputation.
Do you really think vaccinating children is worse than abusing them and trafficking them?
If you want to write an important letter, send a complaint to the Idaho attorney general's consumer complaint division about Jacqueline G. Lindenbach, and her bogus new company, Healthy World Celebrations, LLC, that deals in stolen property, and sells all my products without my authorization, courtesy of a coup led by her and the fake "Dr. True Ott." Consumer fraud and trafficking in stolen property is still illegal, isn't it, retired police officer?
Otherwise, please take me off your mailing list, and do not buy another product from any of my companies.
Anyone who supports pedophiles, extortionists, and thieves, who calls themselves a retired police officer, is not someone I wish to bless with my time, revelatory publications, and healthful products.
Sincerely yours,
Dr.H.
*****************************
Misogynists: By their fruits shall you know them.