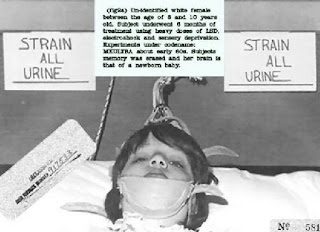 It recently came to my attention that a woman calling herself Ellen Atkin (I've no idea if that is a pseudonym) is using a photograph which has been on the Internet for many years (identified as “MK Ultra Girl”), and has laid claim to it, stating definitively that she is the girl in the photo. She claims that she “discovered” this photo of “herself” in 2015. She exploits the photo profusely, including on a website and a Twitter account.

I had never heard of this character, Ellen Atkin, until just this week, though in reading some of her articles, I saw that in an exchange of messages with another person on Twitter, she boasted that “EVERYONE” knows who she is.

But here is the point of this FRAUD ALERT: Ellen Atkin has appropriated this image which in fact is NOT of her.

The photo in question is that of a survivor of MK Ultra who happens to be my sister. The date of birth shown on the photo is 9-17-53, which is her birthday.

Aside from my concern about her fraudulent use of this photo, I have no interest in this woman, nor in any of her other claims.

I will only add that Ellen Atkin promotes “lizard aliens” and mocks Jesus Christ and Christianity. Which is enough for me to know that, whoever she is, she entirely lacks credibility where truth is concerned, and that her moral values leave much to be desired.

No surprise then that she would be making false claim to this photo, apparently using it as click bait, in attempts to make a name for herself, or the devil knows for what other unsavory motives.

I can only say BEWARE of Ellen Atkin aka "MK Ultra Girl".

I have noticed that this original report exposing Ellen Atkin, FRAUD ALERT: Ellen Atkin aka MK Ultra Girl, has been getting a large number of views. I thought it important to add these later reports.

I have issued more than one public CEASE & DESIST NOTICE to Ellen Atkin to STOP exploiting and defaming the name of Barbara Hartwell.

Yet Ellen Atkin has continued to promote libelous falsehoods against Barbara Hartwell. This woman is a pathological liar, a fraud, a reprobate, a flaming whackjob and a one-woman freak show.

Please spread this report far and wide, to warn others of this "social media influencer" (as she describes herself) whose fraudulent promotions and outrageous lies, especially about MK Ultra, have polluted the Internet across many venues.

THE CONSPIRACY FREAK SHOW CONTINUES: THE ONE & ONLY “MK ULTRA GIRL”, ELLEN ATKIN ON A RAMPAGE OF DEFAMATION

MKULTRA GIRL: Anatomy of a Fraud