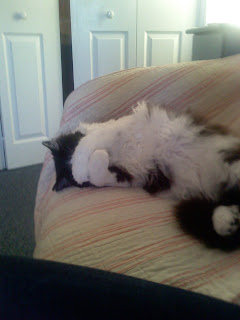 This is a bizarre story. I don't expect anyone to believe it, and I'm not sure I believe it myself. But I will relay the facts of which I am certain, and the readers may decide for themselves.

Certain names have been changed to protect the (possibly) innocent persons involved.

The conspiracy theory of the story is this: My feline companion, Kyra, was wired and used unwittingly as a spy.

I have told this story to only a few friends over the years. Some laughed, and some (usually former government agents) believed my conspiracy theory might actually be true.

The year was 2000. I was living at that time in Woodstock, NY, where I had moved in 1997, after having spent 2 miserable years in 'motel hell', with all my possessions in storage, a result of the government's efforts against me to destabilize my life. Through their machinations, I was driven from place to place to place, forced to move house repeatedly due to the circumstances they engineered.

I had a small cozy house at the base of a mountain (Catskills), where I lived for 6 years, before relocating to Maine in 2003.

At that time I had 8 cats. It was a rural area, on a country back road with little traffic, so I allowed my darlings to roam free outside.

I had a friend who lived in another state, a scientist and UFO/paranormal investigator with whom I worked from time to time in field investigations of UFOs and related phenomena, most especially in Pine Bush, NY (a hotbed of UFO activity) and surrounding areas.

I'll call my friend 'Boris'. Boris himself had quite a few cats. But apparently his wife wasn't a cat lover. One day, in a telephone conversation, Boris told me that his wife had threatened to “get rid of” (what a horrible phrase, which I've heard many times from insensitive persons!) some of his cats, specifically some kittens recently born.

Outraged, I said to him, You tell your wife that unless good homes are found for every single one of those cats, she will have to deal with me. And I know where you live!

Then, one day a few months later (it was May, 2000) Boris came to visit me in Woodstock. Our plan was to go to Pine Bush, not far from where I lived.

Boris came into the house and I offered him something to drink. After half an hour, discussing our plans for the investigation, we had finished our tea, and he said to me, Come out to the van with me, I want to show you something. I thought maybe it was some new high- tech gear for the investigation. I was wrong.

He slid open the side panel of the van. There, nesting on a blanket, was a small cat. Boris said to me, I brought a little visitor.

What do you mean, “a little visitor”? I already have 8 cats!

He said maybe I could take her on a “trial basis” (how many times had I heard that one?). This way, she would not be dumped off at a shelter. Well, of course, it was emotional blackmail. It had happened many times. Every time someone wanted to “get rid of” a cat, they would come to me. I could never say no, that was the problem. But I never once regretted adopting any one of them.

Boris assured me that he would pay all her medical bills and pay “child support” for food and other necessities.

So, it was a done deal. I told him to bring her into the house. I placed her in a bedroom, with food, water and a litter box, so she would be separated from the other cats. Cats are territorial, I have found, much more so than dogs. Dogs can make new friends in the blink of an eye. Cats are far more discerning, but once they love someone (animal or human), they can be just as loyal.

But there was one “condition” to which Boris tried to get me to agree, which I found rather strange. He told me he did not want me to have her spayed. He said it was because Kyra came from a bloodline which he hoped would continue. He had her grandmother and her mother.

I said, Well, I can't promise you that I won't have her spayed. It would be irresponsible, and I can't afford to care for any more cats. But I let the matter drop, for the moment.

Kyra was 5 months old when she was dropped off as “the little visitor”. And she stayed with me for more than 15 years, when she passed away in 2015.

As it happened, the “child support” never materialized. It took all my resources just to pay the rent and bills. As for the cats, I usually had to beg or borrow to support them, especially if there was a medical emergency. So I never did get around to having Kyra spayed.

Once she got acclimated, once she made friends with the other cats (aside from some of the battles, where I had to break up the cat fights, and Kyra was one of the most fierce warriors I've ever known), I knew it would be unfair to keep her in the house, while all the others were going outside.

It wasn't long before Kyra went into heat. She roamed the neighborhood, and I'm sure she had many suitors (to put it delicately). But after 3 years in Woodstock, she hadn't got pregnant, for which I thanked my lucky stars.

I moved to Maine in 2003. This was a beach house near the ocean, and not a rural area. But the cats were used to going outside, and it would have been an exercise in futility trying to keep them inside the house. So, I let them out and never had any problems. Except one. That being Kyra. All the other cats had been spayed/neutered years ago.

The problem developed when Kyra roamed through the streets, yowling, and the neighbors started to complain. Some were of the mind that cats should never be let outside (they are entitled to their opinions), and some just said they couldn't take the noise. I heard it myself, it was certainly loud enough to disturb the peace.

So, finally, I decided that Kyra would simply have to be spayed. Oddly, she still had never got pregnant, despite her numerous boyfriends in both neighborhoods. By this time it had been 5 years, so I wondered, what was up with that?

I took her to a local veterinary clinic. They performed the operation. But something strange was reported to me by the vet. She told me that she found a “foreign object” in Kyra. She had no idea what it was, nor how it had come to be there. When she asked me if Kyra had had any surgery before this, I told her, No, not to my knowledge.

The vet too, thought it strange that Kyra had been roaming free for 5 years, but never got pregnant. But she also explained that the implanted foreign object would have prevented such an occurrence.

So, I started to think about all this, seeking some reasonable explanation. I thought about how Boris tried to dissuade me from having Kyra spayed. I certainly knew that CIA had all the technology to implant an animal. Hell, they'd done it to me, so why not my cat?

Around the same time period, my friend Kathy Kasten (a mutual acquaintance of mine and Boris's) came to visit me in Maine. I told her the story of Kyra, in fact she met Kyra while staying at my house.

She later sent me this story.


Another early example of remote-controlling an animal is the Acoustic
Kitty program from the 1960s. In this project, a cat was surgically
wired up to serve as a listening device. An original document on the
project can be found at the National Security Archive.

CIA tried to listen to Soviets with eavesdropping feline

In one experiment during the Cold War, a cat, dubbed "Acoustic Kitty,"
was wired up for use as an eavesdropping platform.

It was hoped that the animal, which was surgically altered to
accommodate transmitting and control devices, could listen to secret
conversations from window sills, park benches or dustbins.

"They slit the cat open, put batteries in him, wired him up. The tail
was used as an antenna. They made a monstrosity. They tested him and
tested him. They found he would walk off the job when he got hungry,
so they put another wire in to override that,'' he said.

Marchetti said that the first live trial was an expensive
disaster. The technology is thought to have cost more than $14
million.

He said: "They took it out to a park and put him out of the van,
and a taxi comes and runs him over. There they were, sitting in the
van with all those dials, and the cat was dead.''

The document, which was one of 40 to be declassified from the CIA's
closely guarded Science and Technology Directorate, where spying
techniques are refined, is still partly censored.

This implies that the CIA was embarrassed about disclosing all the
details of Acoustic Kitty, which took five years to design.

The memo ends by congratulating the team who worked on the Acoustic
Kitty project for its hard work.

It says: "The work done on this problem over the years reflects great
credit on the personnel who guided it . . . whose energy and
imagination could be models for scientific pioneers.''

By coincidence, in 1966, a British film called "Spy With a Cold Nose"
featured a dog wired up to eavesdrop on the Russians.

It was the same year as the Acoustic Kitty was tested. 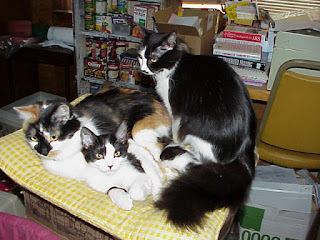 As for Boris, I lost contact with him when I moved to Maine. I don't want to accuse him of being complicit in the implantation of a foreign object in my cat. But still...considering the whole thing, I find it suspicious.

I guess I'll never know for sure what actually happened. Was Kyra the spy cat planted on me?

All these years later, I can only say that even were this true, the people who did this ended up giving me one of the greatest blessings of my life in the person of Kyra.

So I can only thank them, regardless of their motives.

Kyra gave me 15 years of love, joy and comfort. I was privileged to know her and to be her grandmother and friend.