On the evening of January 5, 2018 an acute attempt was made on Geral Sosbee's life via severe assault with directed energy weaponry. I was informed of this and have spoken with Geral and his wife this evening by telephone.

The regular readers of this site will know about the decades of electronic harassment, stalking, assaults against Sosbee, documented on Sosbee v. FBI, many of his reports posted also on this site.

The perps have recently been stalking Geral and his wife on the grounds of the church they attend, making threatening gestures.

Geral has been my best friend and professional colleague since 2001. He is my most valued ally in the battle against corrupt government agencies persecuting whistleblowers.

Here is a brief report which includes links to related previous reports.

(There may be issues with the links, as often happens when posted on my site.)

If you care about justice then I know you will be  outraged, as I am, that this country is going to Hell in a handcart, and those in authority are getting away with abominable crimes against decent, honorable persons who have committed no criminal offenses.

I ask the readers to review this material and distribute it to others.

Updates will be posted as they become available.

Thank you for your consideration.
Barbara Hartwell Percival
January 6, 2018

Past 24 hours fbi tried to kill me with DEW, ELF, causing heart and blood pressure problems. Here is the report where I prove that Senator John Cornyn and USPI helped fbi intimidate me and my wife:

USPI, fbi, SENATOR JOHN CORNYN up to no good

For 30 years the fbi has terrorized me and for the past several years the fbi has fraudulently used a US senator and USPI to join in the threats and harassment. In the links below are evidence to support these accusations of crimes committed against me by fbi, USPI, US senator, et. al. The USPI now withholds his fraudulent report in violation of FOIA. No one can investigate these crimes because the government itself in all branches and departments are controlled by fbi assassins.

The attached document from USPI, under FOIA, was released to me on 12/28/17 and shows how the fbi, USPI, and Senator John Cornyn deceitfully concocted & fraudulently entered my name in CORNYN' s office as a suspect in a mail crime involving a powdery substance. Then, USPI came to my home with Texas DPS C. Rodriguez to illegally and unethically threaten me and my wife. USPI KNIPFING knew all along that my name was planted by Cornyn at the crime scene at Senator's office.


Fbi is exposed by GERAL SOSBEE: 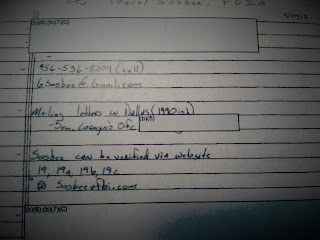