Addendum to Reign of the Macho Minded Morons 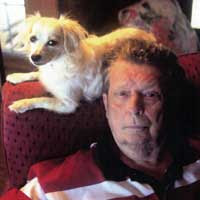 "Why do people hold such events as the "Bunny Bop"? Obviously, because they like to. They like to "hunt" i.e., kill. Other reasons, such as that they have to kill rabbits because there are too many of them, are suspect. Man has an infinite capacity to rationalize his own cruelty."
--Cleveland Amory, From Man Kind?

My recent article, Reign of the Macho-Minded Morons, elicited a flood of e-mail responses, some critical of my viewpoint; some in qualified support; some in total agreement. The article was posted in quite a few places, including Rumor Mill News, Bart Cop, Conspiracy Planet and Rense.com

I couldn't possibly find the time to answer all the e-mails personally, but I do appreciate that so many people took the time to send their comments to me, so I decided to write a follow-up commentary, addressing the concerns of the readers who responded to the article.

Not surprising to me was that most of those who wrote to me were men. I hope that this additional commentary will clear up any misperceptions of the real viewpoint I was attempting to express, but if not, at least I'll know I tried.
It seems many people assumed that I have a negative perception of men in general, or that I was merely engaging in a frenzy of man-bashing. I also realized that some people got the idea that my opinion of ALL hunters is that they are 'Macho-Minded Morons'. On both counts, nothing could be further from the truth!

The truth is that most of my friends and colleagues happen to be men, which has been the case most of my adult life. I have actually found that I have more in common with men, generally speaking, than I do with women. Perhaps this is because I have never been able to relate to some of the more traditionally 'feminine' aspects of women in our culture and I have found that I simply feel more comfortable in the company of men.

I do also have friends (believe it or not) who are hunters and needless to say, NONE of these men fit into the MMM category. If they did, I wouldn't waste a moment of my precious time associating with them.

Now, as to the hunting issue. First let me say that I admit to having a bias against hunting, simply because I am an ardent animal lover. I worked for many years in humane education, animal welfare, wildlife rehabilitation and as a lobbyist for animal rights. I have been a vegetarian since 1969, for ethical and spiritual reasons. That was a personal decision I made because of the reverence I feel for all God's creatures. However, this does not mean that I am critical of those who do eat animal flesh or who hunt for sustenance.

The ONLY hunters I am critical of are those who view hunting exclusively as a blood-sport, what I would call the thrill of the kill mentality.
I can't think of a more notorious icon of the Macho-Minded Moron than rock star Ted Nugent. Nugent debated Cleveland Amory on the Sally Jesse Raphael show in 1989. I was invited by Cleveland to be in his support contingent, a sort of cheering section that each guest brought along to be a part of the program.

I must say that I was appalled at Nugent's attitude. He was cocky, arrogant and cruel. The sadistic thrill he takes in the blood sport aspect of hunting was obvious to all of us. Nugent's comments on the subject were very telling: "Whack 'em, stack 'em and pack 'em"...."Nothing makes me happier than getting up to my elbows in blood and guts" ....

As well,Ted Nugent is a bow-hunter. Bow-hunting is known to be the least effective way of making a 'clean kill', and thus the most painful for the animals. A one-shot kill with a rifle, assuming the hunter is a crack shot, is much more humane.

Interestingly enough, Nugent was also a draft-dodger who evaded military service, not in any honorable manner such as claiming a 'conscientous objector' status, but by showing up at the induction board in a state of degraded filth, after defecating and urinating in his clothing for several days.

Can you imagine such a thing?! ..... I couldn't...... but anyway, Nugent, according to the research done by some of Cleveland Amory's staff at the Fund for Animals, was rejected by the military on the grounds of insanity, and I sure wouldn't argue with that diagnosis.

Apparently, Nugent has no problem with whacking 'em, as long as his targets can't fight back. And by my way of thinking, this is the essence of the coward and bully.

Ironically, Nugent later came forward as a vocal supporter of the U.S. military during George Bush's Operation Desert Storm. And I have little doubt that good old Ted is out there somewhere, waving his flag in support of George W. and the rest of the tyrants, at this very moment. Talk about hypocrisy!

Now let me say that I have always had much more respect for hunters, who make their own kills to feed their families, than for those folks who buy their meat in a supermarket. The factory farming system which forces animals to live in abject misery for their short lives is cruel and unconscionable. On the other hand, an animal who is shot by a hunter at least lives a good life in its natural environment. So, for those who choose to eat meat, hunting is clearly the more ethical alternative.

But, just to make sure I get the point across, here's one more example of the thrill-of-the-kill mentality of the Macho-Minded Morons: The pigeon shoot. 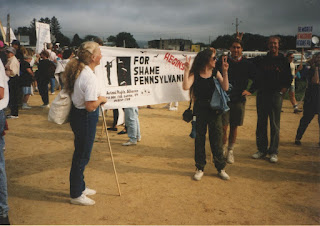 Barbara Hartwell (front right) protesting Hegins Pigeon Shoot
Each year, in Hegins, PA, a large crowd gathers for the Annual Hegins Pigeon Shoot. The birds are brought in from other locations, some captured in cities and some bred exclusively for the purpose of the shoot. The caged birds are then released, thousands of them, and the Macho-Minded Morons line up to blast them out of the sky, amidst the cheers of their families and other spectators, who are to be found picnicking and boozing it up around the meadow where the event is held.

Most of the birds take a long time to die. They fall to the ground flapping their wings and just lie there in agony until the 'trapper boys', young kids between the ages of 8 and 12, run out into the field to retrieve the prey and kill the injured birds by twisting their necks or bashing them repeatedly against a shed.

I kid you not......this is what happens at the Hegins Pigeon Shoot. I know, because I was there to get video footage for my TV show.

At one such event the Ku Klux Klan showed up, dressed in full regalia in order to show their support for the shoot and to join forces with the local rednecks to harass those of us who came to protest the event. 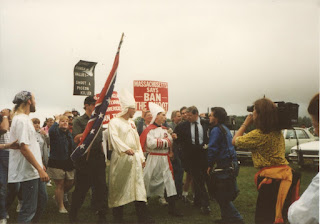 As I stood at the edge of the killing field with my camera man, interviewing spectators and protestors, I was accosted by one such KKK hooligan who smugly informed me that the pigeons were nothing more than "flying rats" and therefore "deserved to die". Obviously a logical extension of the KKK philosophy, in which Blacks, Jews or other non-Aryan persons "deserve" to be persecuted or killed simply by virtue of their racial heritage. And as to the KKK's view of women?.....well, I don't think it's necessary to elaborate.

How can there be an excuse for such mindless, pathological brutality? What possible purpose can it serve? The only purpose of an event such as the Hegins Pigeon Shoot is to commit gratuitous violence for the thrill-of-the-kill. The birds are not used for any purpose after being killed. Of what use could dead pigeons possibly be?

It is this Macho-Minded Moron mentality of power-hungry dominance, sadism and oppression over the defenseless and the innocent that I am addressing. And it is this same mind-set that spawns fascism, tyranny and misogyny. The attitude that 'might makes right'.

If we truly lived in the Land of the Free and the Home of the Brave, so many among us would not have been brainwashed into seeing 'gun control' as necessary to reduce crime and violence, but would see it instead for what it truly is, an abrogation of our right to self-defense.

And lest anyone falsely believe (which some apparently do) that simply because I don't like blood sport hunting, this means I don't defend a citizen's Constitutional right to bear arms, they would be dead wrong. Many of the animal rights activists I once worked with did lobby for gun control, foolishly thinking that taking away the guns would stop the hunting.

On that issue, I sided firmly with the hunters. I even made friends with the head of the hunting lobby in the state of Connecticut, a man by the name of Robert Crook, who shared his legal knowlege and lobbying tips with me and appeared several times on my radio and TV programs. This man was most assuredly NOT a Macho-Minded Moron.

I would not hesitate to defend me and mine, were any criminal intruder to attack or threaten me, my home or those under my protection, whether that meant using a gun or martial arts, in which I am well trained. But I would not be the one to draw first blood and would only resort to violence in self defense. But as I've said many times, to anyone who would listen, I will fight to the death, if necessary, to defend my freedom.

Barbara Hartwell
April 9, 2002
NOTE: I took this photo at the NYC TV studio of the Sally Jesse Raphael Show, 1989.
CLEVELAND AMORY, WAYNE PACELLE & FRIENDS FROM THE FUND FOR ANIMALS VS BOWHUNTER TED NUGENT 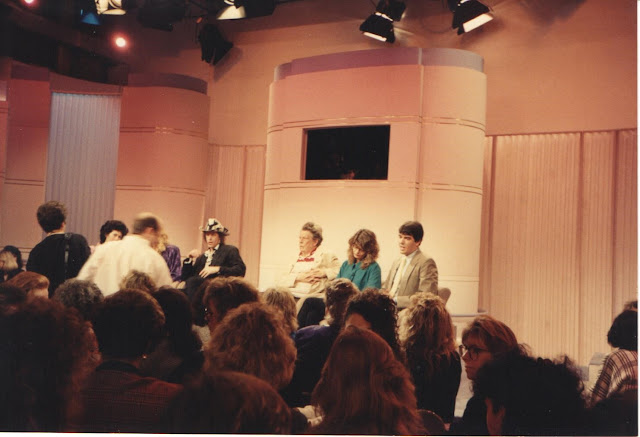