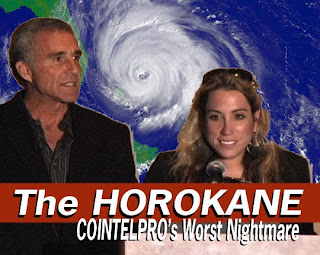 In 2010 it came to my attention that articles were being published by investigative journalists Dr. Leonard Horowitz and Sherri Kane, which named some of the very same group of COINTELPRO  operatives  and their minions whom I had been exposing in my reports for a decade.
I had met Dr. Horowitz in 1998 at a conference in Daytona Beach, Florida where we were both speakers. And of course, I was aware of his work as a whistleblower exposing the pharmaceutical industry and the dangers of vaccines.
When I first became aware of the reports, I didn't know Sherri Kane (who began working with Len Horowitz in 2009), but the more I read of her work, the more I appreciated her insights and her courage in standing up against a criminal network which had been harassing, threatening and stalking me for so many years, as well as running a massive libel/slander campaign designed to ruin my personal/professional reputation and discredit my work as a whistleblower  exposing government crimes and corruption.
As I've exposed in hundreds of reports, and in radio programs, over more than a decade, COINTELPRO exploits a loosely organized pack of  ambitious  amateurs as their minions and stooges, to attack Targets. The attacks take many forms, but they are all based on flagrant aggression against the Targets.
One form of aggression which is particulary detestable is the monstrous invasions of privacy perpetrated by the minions and stooges of COINTELPRO. The stooges publish PRIVATE UNLISTED street addresses of Targets and then solicit like minded criminal thugs to invade private property to commit further criminal offenses against Targets.
In 2004, one of these criminal psycho stalkers, Todd Brendan Fahey, teamed up with Timothy Patrick White (Targets call them the demonic duo) and posted not only my PRIVATE street address on the Internet, but also photos of my house. In conjunction with this criminal harassment, they made false claims about the ownership of my house (naming various people as "owners", and contradicting themselves in the process), and then began viciously harassing, libeling/slandering these individuals simply because they were friends of mine.
They even fabricated and posted false reports of criminal behavior, naming the Targets as those perpetrating non-existent "crimes." These individuals were naturally outraged at their names and reputations being smeared by this pack of rabid hyenas, their harassment and monstrous invasions of privacy being directly responsible for continuing losses and damages to innocent people.
The libelous pseudo reports on Barbara Hartwell (complete with monstrous invasions of privacy) were then posted by numerous other malicious stooges and busybodies, including Ken Adachi (aka Peter Boudreau), James F. Marino, Alex Studer (aka Stooger), a toady for Alma C. Ott (aka "True" Ott), Craig Oxley.
"Xena Carpenter" is a pseudonym (one of many) used by Todd Brendan Fahey, which the coward hides behind to publish smear pieces against Targets, including Barbara Hartwell, Len Horowitz and Sherri Kane. The "Xena Carpenter" website is a front for the criminal stalkers, Todd Fahey and Tim White --both of whom hide behind numerous aliases and screen names to harass, stalk and libel Targets.
The libelous pseudo reports are then reposted and parroted by other malicious government  stooges such as James F. Marino (Mother of All Black Operations --Marino wouldn't know a "black operation if it slapped him upside the head...); Alex Studer (Lab Virus --from what I've seen of his virulent behavior and spouting of  pornographic filth, Studer IS a Lab Virus...); Ken Adachi (Educate-Yourself --this liar-for-hire couldn't "educate" a baboon, if his sorry ass depended on it... ); Craig Oxley (The Unhived Mind --this racist, misogynist thug, an accomplice of predicate felon Tim White, the Unhinged Mind, if ever there was one...).
The stooges have also targeted family members of their main Targets. For  example, false (and libelous) information was published about certain of my family members, especially those who had been CIA.  The stooges made false claims about family relationships, names of family members, locations and addresses where they claimed I was "born" or had lived, or went to college, and then plastered the outrageous lies all over the Internet, posting the pseudo reports and adding their own fabrications and wild speculation to the mix.
One of the worst cases of invasion of privacy was committed against Len Horowitz and Sherri Kane, involving a stolen videotape of a telephone conversation between Horowitz and Kane.
Sherri Kane gives the facts here:


"Jacqueline Lindenbach received the raw, unedited videotape by mail, (without the COINTELPRO racist ranting edits) from RJ Hampton, who is a very amateur editor and has really amateur equipment).  After receiving the tape from RJ, Jacqueline Lindenbach flew over to our inventory warehouse in Salt Lake City, Utah from Idaho and attempted to show it to the owner of the warehouse, as some kind of ludicrous proof that viewing the tape would allow him in good conscience to hand her over all the product inventory belonging to us.He refused to watch the tape, and called the police. Jacqueline then did not return back to Idaho for a a few days, according to Len's children, who called looking for her. This is when she drove to Ogden, Utah and met up with Ott and personally handed him the tape. Ott then gave it to Stooger [Alex Studer] for editing.
Alex Studer, a big fat busybody and loudmouthed stooge, a lackey for "True" Ott then made his own edit of the video, adding libelous commentary, along with racist, sexist epithets. Ott and Studer call Horowitz and Kane Khazar Jews, the spawn of Satan, the seed of Cain, etc. etc.
But here's the main focus of my personal outrage: These government operatives and their stooges are all, without exception, MALICIOUS BUSYBODIES, gate-crashers and Town Criers, who have absolutely NO RESPECT for the privacy or personal boundaries of others.
Just because a person (whistleblower, journalist, activist, etc.) has a public website or radio show, does NOT mean that their PRIVATE LIFE (including any and all PERSONAL/PRIVATE  information/conversations. communications, family/personal relationships)  is fair game for an open season of  invasions, intrusions, assaults on their God-given RIGHT TO PRIVACY.
Anyone who willfully invades the privacy or personal boundaries of another, FOR ANY REASON; anyone who would make threats of blackmail (which happened in the case of the stolen video of Horowitz and Kane); anyone who would exploit the PRIVATE communications of others, out of malice and/or for personal gain, is a violator, an agggressor, and the lowest lowlife imaginable.
And then, these maggots have the audacity to think they can conduct PUBLIC INTERROGATIONS of Targets?  This is precisely what they do.
AS IF the PRIVATE lives of their Targets is any of their business?

AS IF they think we are required to answer to THEM (or anyone else) about our PRIVATE BUSINESS?
MY PRIVATE LIFE IS NONE OF YOUR DAMNED BUSINESS!
How dare you!  Todd Brendan Fahey, Tim White, Ken Adachi, Alex Studer, James F. Marino, and all the rest of you spineless little stooges and cowards!
Ask yourself: What kind of person would monstrously invade privacy by publishing a video or audio on the Internet (or threaten to do so, as in blackmail/extortion), simply for the purpose of causing harm to another, simply to ruin another person's reputation?
In fact, certain websites of these malicious lowlife busybodies have been taken offline in recent months, due to violations of terms of service, which specifically prohibit invasions of privacy and/or white supremacist hate-mongering against Jews, blacks or any other groups.
Alex Studer (Lab Virus) Craig Oxley (The Unhived Mind) and Ken Adachi aka Peter Boudreau (Educate-Yourself) all had their websites taken offline for just such violations, and specifically for their monstrous invasions of privacy against Horowitz, Kane, Hartwell and others.
These Busybodies from Hell --the stalkers, the gate-crashers, the demonic liars, the forgers, the blackmailers, the extortionists, the identity thieves-- will continue to be exposed, for as long as they continue violating our rights.
And anyone who supports them, promotes them (including having links to their websites) or aids and abets their evildoing in any way, will be held accounatable --by me personally-- by any lawful, ethical means available to me.
May their names live in infamy in perpetuity.
Get behind me, Satan!
As for Dr. Leonard Horowitz and Sherri Kane, they deserve tremendous credit --and they certainly get it from me-- for exposing the truth about these Busybodies from Hell, these hate-mongers and demonic liars.
But more importantly, for the support and friendship they have offered to me, and to others who are targeted by the COINTELPRO operatives and their stooges.  For their focus on the Light of Truth and the Love of Christ, for their love of their Brothers and Sisters in Christ, which always dispels the darkness of malice, deception, bigotry and hate.
God bless you, Len and Sherri!
Barbara Hartwell Percival
September 20, 2011
Barbara Hartwell Percival
Legal Defense & Research Trust
PO Box 22
Old Orchard Beach, Maine 04064
Barbara Hartwell Vs. CIA
http://www.barbarahartwellvscia.blogspot.com
Posted by Curriculum Vitae at Tuesday, September 20, 2011