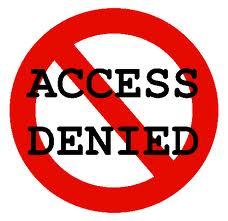 The peculiar evil of silencing the expression of an opinion is, that it is robbing the human race; posterity as well as the existing generation; those who dissent from the opinion, still more than those who hold it.  If the opinion is right, they are deprived of the opportunity of exchanging error for truth:  if wrong, they lose, what is almost as great a benefit, the clearer perception and livelier impression of truth, produced by its collision with error.
--John Stuart Mill, On Liberty, 1859

We have a natural right to make use of our pens as of our tongue, at our peril, risk and hazard.
--Voltaire, Dictionnaire Philosophique, 1764

Over the past few months, it has come to my attention that the efforts by government to censor and sabotage my website have escalated dramatically.

Recently, I took my computer in for service to a trusted professional. He had installed the best state-of-the-art security available, virus protection/firewalls, and I needed to renew my contract. On the day I took my computer home, a strange thing happened. I could not access my own website.
Here is the NOTICE that came up on my screen:
ACCESS DENIED
WARNING
Parental Control. Heuristic analysis of content: VIOLENCE
I realized that somehow, the settings for 'parental control' (which allows blocking of certain websites by parents) had been mistakenly activated. I switched the setting back, and my website came back up on the screen.
But had this little glitch not occured, I would not have learned that the leftist/busybody/control freak powers-that-be have designated my website as some sort of "danger" to children, purportedly because the content has been deemed to be promoting "VIOLENCE."
The irony here is that I do not advocate any sort of "violence" (except in the case of self-defense) -- but I certainly do EXPOSE violence, that is, what is routinely committed against innocent, law-abiding persons by the U.S. government and their minions.
A few weeks later, when engaged in some 'housekeeping', checking the links on my site and adding new ones from the general archives, I discovered that several of the reports had been mysteriously DELETED.
To my prior knowledge, only one of  my reports had been summarily and "officially" axed by Google (who owns the 'blogspot' sites) because of a bogus "complaint" by the "Xena Carptenter" website, a pseudonym used by criminal government stooges Todd Brendan Fahey and Tim White for the purposes of  disseminating libel against patriots and whistleblowers, most notably Barbara Hartwell and associates.
See evidence of Google censorship here:
http://barbarahartwellvscia.blogspot.com/2010/02/xena-carpenter-meets-demonic-duo-fraud.html
Google sent me the "complaint" by e-mail, and then, without my permission or knowledge, DELETED my report, which exposed these scum criminals. I've had the 'blogspot' site since 2006, but only because it is "free" (yes, I know...nothing is free, and you get what you pay for!) and I could not afford to pay for web space, domain name, maintenance, etc.
Of course, by now, everyone knows that Google is in bed with NSA.  The evildoer CEO, Eric Schmidt --who blatantly advocates monstrous violations of privacy, as well as forced censorship-- is a scumbag.
But getting back to the DELETED reports...I went into my archive files and reposted each report, along with exposing the shenanigans of Google once again.
But (unfortunately for me), there's more...
Today, while checking links again, I found that one report, which had a photo of Barbara Hartwell included, had somehow been corrupted. Normally, when clicking on the photo (which had been there for years) it would have just given an enlarged version of same. Not today. Instead, a WARNING NOTICE came up on the screen which told the viewer that:
"This website has been reported as unsafe."
"This website has been reported to Microsoft for containing threats to your computer that might reveal personal or financial information."
Well, golly gee, I wonder WHO ALL could have "reported" my website to Microsoft?
So I simply deleted the photo, in the hope that this will solve the problem (at least for now.)
But I'm not the only one having these problems. My friend Geral Sosbee has also been targeted for escalating censorship and sabotage, not only by Google, but also by his enemies in the FBI, who have been persecuting him, including --but not limited to-- in attempts to silence him, for decades.
Here's a notice from Geral's website,  http://www.sosbeevfbi.com
The link to the 'fbi/cia are terrorists' site is often blocked from access on the internet by fbi false labels which are intended to discredit the compelling content therein.
FBI/CIA ARE TERRORISTS
http://sosbeevfbi.ning.com/
Just one more example of attempted censorship: I'm a regular listener, and a huge fan of The Dave Champion Show.
http://www.davechampionshow.com/archives/
As I understand it, the show is syndicated on a number of stations. Recently, while listening to Dave's program, he mentioned that a certain radio station (he did not name the station, but I believe he said it was in Utah) had decided to stop airing Dave's program. Why? Because some of the listeners complained that Dave Champion sometimes used the words "hell" and "damn".
How totally absurd!
Dave stated that he is not willing to be censored, but did invite listeners to send their comments as to whether they wanted to continue to listen to his show ("curse words" included) or have it taken off the air.
So now, the way I see it, because he is not willing to cater to this bunch of whining morons by watering down his message; because of the small-minded stupidity of a certain contingent of listeners, who are trying to censor Dave Champion, the rest of the people tuning in to that station, who might have greatly benefitted from hearing his message, will be deprived of the opportunity.
ACCESS DENIED: How IDIOTIC is THAT?!
Barbara Hartwell Percival
February 19, 2011
Barbara Hartwell Percival
Legal Defense & Research Trust
PO Box 22
Old Orchard Beach, Maine 04064
Barbara Hartwell Vs. CIA
http://www.barbarahartwellvscia.blogspot.com
Posted by Curriculum Vitae at Saturday, February 19, 2011