A woman using the name “Penny Shepard” has been engaging in multiple offenses against Barbara Hartwell, since 2019.

This offender uses a number of websites and various social media platforms as a venue, including Facebook, Twitter and a site she calls Shepard Entertainment.

I do not know this woman, and had never heard of her until I found the name of Barbara Hartwell as a subject of sensationalist exploitation on various social media sites and later on a website she runs, Shepard Entertainment. I do not know if this is her actual name, but having no other way to identify her, I have used it in my reports exposing her multiple and continuing offenses, described above.

Upon finding my name grossly exploited by Shepard, I also issued public directives that she cease and desist from the use of my name. To date, those directives have been disregarded, and she has not only continued to perpetrate these grievous offenses, she has escalated them, and done so in collusion with several accomplices.

Shepard has engaged in wild speculation, while exploiting my name, also exploiting the names of some of my family, friends and colleagues. By doing so she has promoted a plethora of false information, damaging to my good name and professional reputation, in addition, monstrously invading the privacy of and defaming all named individuals, including Barbara Hartwell.

Shepard has promoted many sensationalist false stories and made extravagant claims about herself, which include the subjects of CIA, MK Ultra, Satanic Ritual Abuse, well-known public figures, such as Hollywood actors, politicians, government whistleblowers, satanists, Nazis, etc. in which she has maliciously and fraudulently inserted the name of Barbara Hartwell, making false claims of my involvement, and involvement of certain of my family, friends and colleagues, with these individuals.

Shepard has publicly and aggressively harassed certain of my colleagues, using messages and posts on social media, attempting to extract private information, and to make contact with Barbara Hartwell (unwanted by me), and using the false pretense of familiarity by calling me by my Christian name, when she does not know me. When her efforts failed to make contact, she then began to promote additional falsehoods, continuing to exploit and defame my name, along with the names of those she attempted to use as intermediaries.

Shepard has exploited and defamed the name of Barbara Hartwell in connection with material she poached from certain of my friends/colleagues, where my name was used in articles by these individuals, with my permission. She then added her own fabrications, wild speculation and outrageous lies, to promote a totally false, fraudulent and defamatory picture, known as False Light. In doing so, she also injuriously exploited and defamed the names of these individuals.

Shepard has also exploited and defamed the name of Barbara Hartwell in connection with individuals with whom I am not acquainted, making fraudulent “connections” which do not exist, and never have existed, and promoted outrageous lies about events, which never happened.

Shepard has used material on her website and social media, without proper attributions, so that the reader cannot identify the source, and then fraudulently connected this material to the name of Barbara Hartwell, while misspelling the names of individuals cited.

Shepard has designed and promoted images, using photos and screenshots, including from my website, Barbara Hartwell Vs. CIA, which grossly misrepresent, exploit and defame the name of Barbara Hartwell. She has plastered these defamatory images all over social media, including Twitter and Facebook.

Shepard has solicited the further exploitation and defamation of the name of Barbara Hartwell, by engaging in malicious gossip on social media, promoting false information, whereby other aggressors of her ilk have expanded the defamation campaign, thus increasing the damages to Barbara Hartwell.

Penny Shepard does not know me. I have never, at any time, had any contact with this woman, nor will I ever. She does not know, nor has ever known, any members of my family, nor any of my friends or colleagues (including those deceased). I have no mutual acquaintances with this woman.

I have no reason to believe anything she has ever publicly stated about herself, in any venue, or related to any subject or issue. I attribute ZERO CREDIBILITY OR LEGITIMACY to this woman, nor to any person who supports, endorses or promotes her in any way, or who is an accomplice to her offenses against persons. All known names of accomplices are immediately added to the HALL OF SHAME on this website.

Furthermore, I state with absolute certainty that there are NO commonalities, similarities, connections or links of any kind whatsoever, past or present (and certainly not future), as regards the life, history, background of Barbara Hartwell and this uttterly despicable, aggressive fraud, liar, scavenger, gate-crasher, Penny Shepard. NOTHING which has ever been promoted by Penny Shepard has anything whatsoever, in fact, truth or reality, to do with Barbara Hartwell. All such claims are entirely baseless, false and fraudulent.

I can guarantee, there will be serious consequences for all offenses perpetrated by Penny Shepard.

Stating the Truth for the Public Record

In Pursuit of Justice

ONE EXHIBIT AS EVIDENCE: 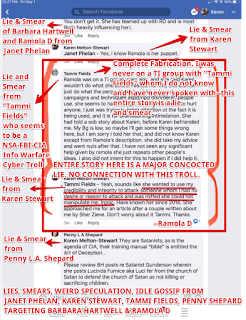