FOR THE LOVE OF ANIMALS (4): Hunting Related Tragedies in Connecticut 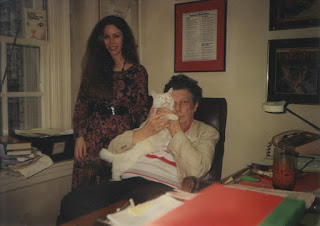 
A few years ago I started what I intended to be a series on advocacy for animals, called FOR THE LOVE OF ANIMALS, based on my many years of activism. I worked with a number of organizations, including HSUS and The Fund for Animals, founded by my friend, the late, great journalist and author, Cleveland Amory.

I started my own organization, Humane Education Network, during the late 1980s, which worked mostly in education, sponsoring lectures at schools (elementary through college), clubs and civic organizations.

We sponsored events such as protests and demonstrations, mostly in the Northeast US. I also worked in animal rescue, including wildlife rehabilitation and I was Director of the Connecticut chapter of the Non-Hunters Rights Alliance.

I lived in Greenwich, Connecticut, where I had a terrestrial radio program on WGCH, which covered (among other topics), animal rights issues. I later lived in Wilton, Milford, Darien and New Fairfield.

For one reason or another (including computer problems I could not afford to hire someone to fix) the series thus far only has three parts. I recently was able to have the problems fixed by someone without a fee, so I now am able to post documents from hard copy files, including photos I scanned into the computer.

Other than that, I have become very weary of the so-called “pandemic” hysteria, the lockdown and the limits imposed on every area of my life by the pontificating, leftist-lunatic tyrants in government and their media lapdogs.

Getting back to work on this series is a relief, which brings me back to a simpler and happier season in my life, when a good deal of my time was spent pursuing one of my most inspiring passions, based on my love of God's innocent creatures.

This article was published, about 30 years ago, in a number of newspapers, including Greenwich Time, Stamford Advocate and was also picked up by the Associated Press.

I have copied it from the original, by retyping it, as the scanned copy was too hard to read.

We knew it would happen again – that it was only a matter of time.

On Nov. 11, a young man's life was summarily snuffed out by a single blast of a shotgun – a shotgun wielded by a hunter who said he mistook the young man, jogging down a dirt road, for a deer. Kevin Elliot's life ended because a trigger-happy hunter couldn't wait long enough to be certain that his quarry was in fact a deer – and not a human being.

Many residents of Connecticut have strongly and repeatedly expressed our opposition to hunting in this state, which comprises primarily developed land that is private property in residential suburbs or state-owned parks, roads and forests. Many of us have been telling our legislators, the Department of Environmental Protection and anyone else we thought would listen that it simply is not safe to allow hunting in such heavily populated areas. But have they been listening? Evidently not. For if they had, Kevin Elliott would probably still be alive today.

We have formed citizens' coalitions and ad hoc committees to ban hunting. We have written letters by the dozens to editors of Connecticut newspapers. We have voiced our concerns in referendums, public forums and debates. We have lobbied in Hartford. We have even staged demonstrations and protests against hunting. But to no avail.

In fact, the situation has worsened. The bowhunting season was recently extended by two weeks. And the last thing we heard was that crossbows – the most dangerous and deadly weapons in the hunters' arsenal – were slated to shed their illegal status and be approved for use (with special permits) by the handicapped! And so it goes. By all appearances, it's business as usual: Connecticut legislators and the DEP toadying to the hunters and their supporters in the National Rifle Association lobby, and capitulating to their every ill-considered whim.

The hunting death of Nov. 11 in Morris was not an isolated incident, not by a long shot. In 1988, for example, there were 177 hunting-related human fatalities in the U.S., with injuries to 1,719 people, many of whom were innocent bystanders.

Hunters routinely tout the safety of hunting by reminding us that Connecticut has one of the best safety records in the nation.

But how “safe” is safe enough? Are two or three human fatalities every ten years acceptable? Yes, apparently it's acceptable to the hunters if a few people have to die – as long as they can continue to hunt.

Hunters are fond of quoting statistics. But Kevin Elliott wasn't a statistic. He was a human being. He had a valuable career, a family and friends, a life. Twenty-six year old Jack Rogan of Lebanon also had a life; at least until he was gunned down in November 1988 by another hunter, running amok.

While hunting-related fatalities are undoubtedly the most tragic consequences of our current laws that allow hunting in populated areas, Connecticut residents have been subjected to some other very frightening incidents over the past several years.

On Thanksgiving 1989, Weston residents Carlos and Terry Mello experienced the trauma of discovering a bullet lodged in the wall only inches above their sleeping baby's crib. In 1990, Eleanor Sasso of Wilton was horseback riding along some trails in Ridgefield when a hunter's arrow came whizzing out of the woods, narrowly missing her head. In 1988, Bob and Carol Gilges found a yearling deer, dead of a gunshot wound, just 25 yards from the front porch of their Greenwich home. That same year one of their dogs was shot by a hunter. In 1987, a young boy was showered with buckshot while walking on the beach near Merwin Point in Milford. A Westport woman was shocked when a volley of buckshot came crashing through her living room windows.

In tones of anger and frustration, people tell of razor-sharp arrows left by hunters and later picked up from the ground by their children.

We, the non-hunters of Connecticut, form 97 percent of the population. We outnumber the hunters many times over. And many of us are outraged that these hunters – whose activities are sanctioned by the state – take over our woods every autumn. We too would like access to the woods.

But we dare not go walking through the woods – not even on our own property. We're afraid to let our children play in the backyard. We know all too well that bullets and arrows don't respect property boundaries, and neither do most hunters.

Why should so many of us continue to tolerate being held virtual hostages in our own homes? Just so hunters, high on their hormones and adrenaline, can relish the thrill of the kill?

Who among us can afford not to speak out against these atrocities? Whether we are landowners, taxpayers, defenders of wildlife, nature lovers, or just Connecticut residents who feel it's about time we step outside – we must make our feelings known and be willing to stand up for our non-hunters' rights. We must let the hunters and their supporters know that Connecticut citizens are no longer willing to live in a thralldom imposed on us by their invasive, intrusive and violent forms of “recreation”.

Kevin Elliot was one of us. He spoke out against hunting. But on Nov. 11, his voice was tragically silenced. Let's not allow the rest of our voices to be drowned out by the racket of gunfire.

Barbara Hartwell, who lives in Wilton, is a former Greenwich resident and a longtime opponent of hunting in Connecticut.
Posted by Curriculum Vitae at Saturday, July 25, 2020