FOR THE LOVE OF ANIMALS (5): A Travesty of Justice in Greenwich, Connecticut

Thirty years ago (1990) I was arrested after participating in a demonstration in Greenwich, Connecticut, where I lived at the time. A group of us conducted a street theater, wearing black robes to symbolize a funeral for small animals (including rabbits, mice, guinea pigs) literally tortured to death in L'Oreal laboratories, to cater to the vanity of heartless women who purchase the cosmetics.

It took some time (and many such demonstrations), but we eventually won a victory. L'Oreal did stop testing on animals, due only to our efforts to save these defenseless creatures from brutal torture.

At the time of the arrest, I produced and hosted a radio program on terrestrial radio, WGCH, the only radio station in town. After the arrest, when my photo appeared on the front page of the Greenwich Time, I was called into the office of the manager of the station. I was told that the publicity surrounding my arrest was not good for the “image” of the station, where I had produced my program since 1987, and had a large audience, and top ratings.

He suggested that I should give up my activism for animals, or at least “tone down” my methods of protest. It was clear to me that he had received “complaints” from some of the town officials.

I later learned, from a client of my private counseling practice, that the person who had lodged the complaint was the mayor of Greenwich (aka First Selectman), who also had a radio program at the station. According to my client (another official in town government), the mayor was miffed because my ratings were higher than his (no surprise, since his program was drop-dead boring) and I had been given a better time slot than his. I also suspect that the arrest was politically motivated, as in a posh, old money town like Greenwich, this sort of unseemly behavior is looked down upon.

Anyway, I told the manager (who was a very nice man, but apparently, “just following orders”) that if he wished to take my program off the schedule, he could do that, but that I would not stop my activism for animals, nor modify it in any way. This was a matter of principle, and I would stick to my guns. I told him, You do what you have to do, and I'll do what I have to do.

He sighed, and said, Okay, do what you have to do. I stayed at the radio station until 1991, when I moved from Greenwich.

On another note, my son was attending Greenwich High School at the time. Shortly after the arrest, my son came home from school, telling me that one of his classmates had been boasting that his father (Sgt. Brown) had arrested some criminals and it made the front page of the Greenwich Time! The classmate apparently did not know that he was boasting to someone whose mother was one of the “criminals”.

My lawyer advised me to plead “no contest” to the minor (though wrongful) charge and I walked away with no criminal record. That was the last time I was arrested, though I have continued my activism (for animals and human rights) ever since.

This photo is from the front page of Greenwich Time, March 31, 1990. Sgt. Brown of Greenwich Police Dep't is the arresting officer, pictured pointing a finger at Barbara Hartwell (front, right). 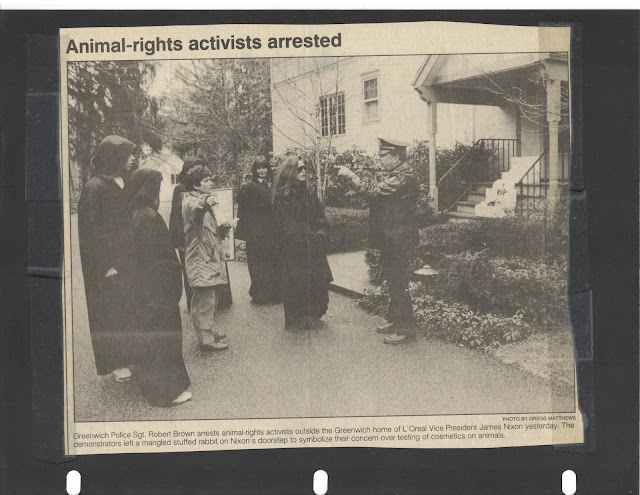 Here is a letter to the editor of Greenwich Time, which they published not long after the arrest.

I was arrested on March 30, 1990, in front of the home of James Nixon, vice president of L'Oreal cosmetics. I was one of the 27 animal rights activists present that day, all affiliated with the Fairfield County Animal Rights Alliance and the Washington D.C.-based People for the Ethical Treatment of Animals.

Nine of us were arrested after delivering petitions holding thousands of signatures protesting against the cruel and fatal testing of L'Oreal cosmetics on small and defenseless animals.

The nine persons arrested were later charged with first degree criminal trespassing. Also arrested was a free-lance photo-journalist affiliated with, but not employed by Greenwich Time, whom the police claimed was “a publicity person for the organization”. In fact, this journalist is not a member of any animal rights organization, nor was he ever involved in our group in any way; he was merely attempting to photograph the protest. The police later – much later – dropped all charges against him when he demanded a trial to prove his innocence.

The protest consisted of a gathering of people who stood across the street from Mr. Nixon's house (on town property) carrying signs and a toy stuffed rabbit spattered with red paint to symbolize the torture and death that animals undergo every day in L'Oreal laboratories. (It seems that some people, after reading the stories in Greenwich Time, actually believed that the rabbit had been a real dead animal!)

After standing across the street for the demonstration, our plan was to simply deliver the petitions which were piled in miniature coffins (again to remind Mr. Nixon of the death toll of innocent animals) and leave. We did not stage a protest on Mr. Nixon's property; we only entered it briefly to make a delivery of petitions.

As everyone knows, Jehovah's Witnesses, door-to-door salesmen, political candidates, Girl Scouts, census-takers, and sundry others enter private property on a regular basis, all with their own agenda. Typically, none of these “violators of the law” have been invited to do so, nor have been given permission to enter private property; yet we don't read of their arrests on the front page of Greenwich Time.

The arresting officer, Sgt. Brown, was quoted in the April 1 Greenwich Time avowing that all those arrested had been given a warning not to enter the property. However, the police report written on the day of the arrest stated that only one person had been warned. Several days later a “follow-up report” surfaced in which he claimed that all those arrested had been warned. To which report are we to give credence? Since this major discrepancy speaks loudly and clearly for itself, I need not belabor the point. Under the law, police are required to warn each and every individual, either separately or collectively, and that warning must be disregarded before an arrest can be legally made for first degree criminal trespassing.

As I stated in a Greenwich Time interview after the arrest, I personally was never warned against setting foot on the property, and since I had never heard of anyone being arrested for delivering papers to someone's door, I believed myself to be operating within the limits of the law. Within a short time after the arrest the charges were reduced on several of the protesters (including myself), while three others (including the uninvolved photographer!) were still saddled with the original criminal trespass charge.

Evidently the police had changed their minds once again and decided that: not one, not all, but three people had been warned. (I never learned whether a third “follow-up report” to this effect had been issued.)

The details of the ridiculous ordeal the arrested persons were then subjected to would require several more pages to relate. Suffice it to say that between the time of the arrest, complete with handcuffs and a tour of downtown Greenwich in the “prisoner van” , and the encounter with the court system, considerable time and money had been wasted by each of those arrested just to avoid an even worse nightmare. This travesty of justice is a shameful waste of taxpayers' money.

Have we devolved into a police state where citizens cannot exercise their First Amendment rights? Why don't the Greenwich police find a more productive use for their time and energies? Like protecting the public from the real threats in our town: drug dealers, rapists, burglars, drunk drivers, etc.

Harassing those persons whose only “crime” is compassion for suffering animals and the courage to try to put a stop to it shows the sorry state our system must truly be in. I will continue to use my energies toward the goal of peacefully and legally making changes which will get another category of dangerous persons off the streets, out of the laboratories and off their smug behinds in the corporate boardrooms: those who ought to be charged with criminal activity are those who mercilessly exploit and torture living creatures for the love of the almighty dollar.