Christian Warriors' Crusade Against Pornography, an Abomination to God: In Support of Coach Dave Daubenmire 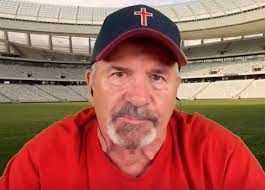 Flee fornication. Every sin that a man does is without the body; but he that commits fornication sins against his own body. What? Know ye not that your body is the Temple of the Holy Ghost which is in you, which ye have of God, and ye are not your own? For ye are bought with a price; therfore glorify God in your body, and in your spirit, which are God's.

I will set no wicked thing before mine eyes: I hate the work of them that turn aside; it shall not cleave to me.


I find it important to begin this report by clearly stating my position regarding pornography. First of all, I have an absolute loathing of pornography in any form, and all of which it is emblematic. What's more, I firmly believe it to be an abomination to God. Yes, that is my personal opinion, and it is certainly shared by many of my Brothers and Sisters in Christ. That view is also supported by a tremendous body of research (including my own) which clearly indicates the moral, psychological --and most importantly, spiritual--dangers associated with pornography. This applies across the board, to Christians and non-Christians alike.


--Barbara Hartwell, from Poisoned by Pornography (2011)

I am not a sports fan. I don't watch the Superbowl. But I am certainly aware of the cultural and moral rot which accompanies this event, in the form of the Half-time Show.

Normally, I would not even consider watching such a sleaze-filled spectacle. But this year, I forced myself to find the video online, for one reason: Coach Dave Daubenmire's daily show, COACH DAVE LIVE, of PASS THE SALT MINISTRIES.

I've been a regular viewer of the show for the past couple years, and was inspired to be a part of the EQUAL JUSTICE TOUR. I attended the first two events in 2019, trips to the home of career criminals Bill and Hillary Clinton, in Chappaqua, NY.

It was a blessing to meet and have fellowship with the Christians, veterans and patriots, all of whom love the Lord Jesus Christ, all of whom are taking action in pursuit of justice.

I watched Dave's show, following the Superbowl. I listened, as he made it very clear that this NFL Half-time show was awash in perversion: pole dancing and half-naked women flashing “crotch shots”. He considered it a danger to children, a corrupting influence. He was offended and outraged that such pornographic images are being pumped into people's homes, with NO WARNING about the vile nature of the show.

I could not possibly agree with him more than I do. Since I cannot comment on something I have not seen, I watched as much as I could bear. I did not watch it to the end. But I saw enough, more than enough. It was absolutely sickening, especially when you consider the children who are being indoctrinated into believing this show of smut, this display of debauchery, is “normal”, just entertainment, nothing to be concerned about.

It was not only pornographic, it was downright demonic!

Coach Dave explained that he was targeted by sex perverts, as a tide of sewage filled his e-mail box, including photos of erect penises. He was called vile names, and falsely accused of all manner of dastardly deeds.

But as we Christians know, that is the price we must pay in the fight against the demonic realm. If you are in the battle, engaged in spiritual warfare, you will be attacked by demons.

If you are truly a born again, Spirit-filled Christian, you will be outraged. You will be afire with righteous anger.

Are you a parent? A grandparent?

You will do all in your power to protect children, ALL children, but especially your own. And, you will want to DO SOMETHING to put a stop to this moral rot, in the name of our Lord and Savior Jesus Christ. Amen.

Barbara Hartwell
Minister of the Gospel of Jesus Christ
February 10, 2020


See this special Saturday edition, which covers the issue in detail:


Following are links and excerpts from some of my older reports, exposing the dangers of pornography, against which I am a longtime crusader.

God's Liberation from the Morality Wasteland (2004)


Sometime last year (2003) I decided to change my e-mail address and took e-mail contact info off my website. The most compelling reason was that I was literally sickened (as in, hand me the barf bag!) by the assault of pornography that hit my mailbox like a tidal wave of raw sewage, day in, day out.


The porno-mongering degenerates became so aggressive that instead of just ads with links for these hideous websites, they started sending full color glossy photos of their perverted wares, which slimed onto the screen before the unfortunate recipient --Yours Truly-- could turn my eyes away and hit the DELETE button.

Although I wrote dozens of complaints to various servers in an attempt to stop this pornographic harassment--and harassment it certainly was-- and blocked hundreds of e-mail addresses used by the S.O.B.s, it was an exercise in futility...the incoming sleaze was relentless.

The problem, as I see it, is not just that pornography is widely AVAILABLE, or even that the purveyors of this filth engage in aggressive campaigns to promote it. The problem is that the population – or at least large segments of it – have become inured to its destructive nature and blinded to the DANGERS of pornography in ANY form, even those considered the most mild and "harmless"; for example, pornography which is euphemistically deemed "erotica", in an attempt to sanitize and mask its true nature.
The truth is, NO form of pornography is harmless. In fact – from a spiritual perspective alone – it is more dangerous than most people could ever imagine.


Why is this true? First of all, because pornography degrades and demoralizes the human spirit by making sex into a commodity; a soulless "recreational" activity, devoid of love and spiritual meaning; by such perversions as sado-masochism, group sex or homosexuality; and worst of all, by exploiting in the most debasing manner what God meant to be a private, sacred union between a man and woman who have entered into a marriage covenant based on true love.

And even though "true love" may be one of life's most profound mysteries, such love between a man and woman can ONLY come from the grace of God.

Pornography, on the other hand, is an abomination to God. In essence, any involvement with pornography taints the user with unclean spirits and effectively cuts off the user from contact with God. There are NO EXCEPTIONS. Those who make or use pornography cannot possibly know God. In my estimation, slamming the door in God's face is the greatest danger anyone could be foolish enough to bring upon himself!

Unclean spirits, and in some cases, demons (yes, you read that right, demons!) feed off the psychic energies generated by the vile images depicted and attach themselves to the etheric energy field of the user. As for those directly involved in the making of pornographic films and photographs, unless they clean up their act, and renounce --once and for all-- these ungodly vices, they're on the way to hell, in a handbasket!

Poisoned by Pornography: A Plague of Perverts, Predators, Pedophiles and Pimps (2011)


As a Christian, I consider it a moral imperative to do all in my power to put these loathsome criminal evildoers out of business. From the moment I became a mother (1976), I fully understood the level of vigilance that would be necessary to protect my own child from these vile predators. Now, as a grandmother of three, my dedication to putting these bastards out of business has increased many times over.
As for the children who have been victims (many of whom have been sold into sex slavery and/or murdered) of these rapists, child-traffickers and the pornographers who exploit the suffering of innocents, the blood of these children cries out for retribution and justice, and their tears mix with those of the legions of weeping angels.
Were it in my power, I would forever expunge them and their evil from the face of the earth. As it happens, I'll have to put my trust in God to make that happen. Meanwhile, I do have the ability, and more than enough motivation, to expose these perverts, pedophiles, predators and pimps.
Exposing this monstrous evil is the first step in generating the necessary outrage among decent, Godly, caring people, including (but certainly not limited to) the parents and grandparents whose children are at risk, for indeed, every child is at risk, as long as these predators roam the streets, skulk about the schoolyards, and troll the Internet, seeking new victims on which to visit their vile perversions.
If you, or I, in full knowledge of this holocaust, in righteous outrage at these atrocities, don't make it our business to stop them, who will? We do have more power than we may think to bring these evildoers to justice and take them out of circulation, so they can never harm another child again.
These children, the victims, are in desperate need of our help, as advocates and protectors, and so we must pray for the strength and courage we need, and let our voices be heard.

Institutionalized Depravity: A Culture of Sex Predators, Their Advocates and Protectors (2011)


The purpose of this report is to encourage the reader to take a hard look at the prevailing attitudes (I will give a number of examples, which still, barely scratch the surface) of a culture which not only fails to prevent the sexual abuse and exploitation of children, but which actually blatantly encourages it. A culture inculcated with the 'values' of what I call 'Secular Humanist New Age Pop Psychology'--the moral relativism and social engineering which comprise the doctrines of devils, as opposed to the moral absolutes, the irrefutable laws of God, which comprise the Gospel of Jesus Christ.

Rather than taking a hard line against the rapists of children – seeing them clearly for the evildoers, the monsters, they are – those with this secular humanist/New Age mindset coddle these criminals, protect them, and make excuses for them... "Oh well, they were (or may have been) abused themselves...."...."Well, they were just 'born that way' and after all, everyone has a different 'sexual orientation'"...."We need to forgive them and treat them with compassion..."

The hell with forgiveness and compassion for these evildoers! We need to fight for the rights and the protection of all children. We need to fight for justice. These loathsome criminals should be prosecuted to the fullest extent of the law, permanently taken out of circulation to guarantee they can never harm another child again. Period. Case closed.
Posted by Curriculum Vitae at Monday, February 10, 2020