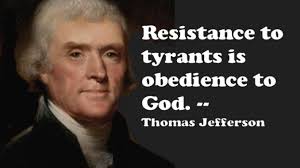 Ye are the salt of the earth: but if the salt have lost his savour, wherewith shall it be salted? it is thenceforth good for nothing, but to be cast out, and to be trodden under foot of men.

Ye are the light of the world. A city that is set on an hill cannot be hid.

Neither do men light a candle, and put it under a bushel, but on a candlestick; and it giveth light unto all that are in the house.

Let your light so shine before men, that they may see your good works, and glorify your Father which is in heaven.

We hold these truths to be self-evident, that all men are created equal, that they are endowed by their Creator with certain unalienable rights, that among these are life, liberty and the pursuit of happiness. That to secure these rights, Governments are instituted among men, deriving their just powers from the consent of the governed. That whenever any form of government becomes destructive of these ends, it is the right of the people to alter or to abolish it, and to institute new Government, laying its foundation on such principles and organizing its powers in such form, as to them shall seem most likely to effect their safety and happiness.

Be it remembered, however, that liberty must at all hazards be supported. We have a right to it, derived from our Maker! But if we had not, our fathers have earned and bought it for us at the expence of their ease, their estates, their pleasure, and their blood.

—And liberty cannot be preserved without a general knowledge among the people, who have a right, from the frame of their nature, to knowledge, as their great Creator, who does nothing in vain, has given them understandings, and a desire to know; but besides this, they have a right, an indisputable, unalienable, indefeasible, divine right to that most dreaded and envied kind of knowledge, I mean, of the characters and conduct of their rulers.

Amendment 1: Congress shall make no law respecting an establishment of religion, or prohibiting the free exercise thereof; or abridging the freedom of speech, or of the press; or the right of the people peaceably to assemble, and to petition the Government for a redress of grievances.

Amendment 2: A well regulated Militia, being necessary to the security of a free State, the right of the people to keep and bear Arms, shall not be infringed.

Amendment 4: The right of the people to be secure in their persons, houses, papers, and effects, against unreasonable searches and seizures, shall not be violated, and no Warrants shall issue, but upon probable cause, supported by Oath or affirmation, and particularly describing the place to be searched, and the persons or things to be seized.

Amendment 9: The enumeration in the Constitution, of certain rights, shall not be construed to deny or disparage others retained by the people.

You were bought at a price; do not become slaves of men.

It was upon this premise that our Founders drafted the Declaration of Independence, our Constitution, and the first 10 amendments which are the Bill of Rights. At the Constitutional Convention (1787), Benjamin Franklin declared: "We have been assured..in the Sacred Writings, that except the Lord build the house, they labor in vain..."

If you are a defender of Liberty, and our God-given, unalienable rights, as protected under the Constitution, then you know beyond a shadow of doubt how very WRONG are the actions of the tyrants who have created a crisis, using an unproven “pandemic” to orchestrate a panic and worldwide lockdown, using Psy War and social engineering.

As for those who have been elected, such as state governors and mayors, Congress and Senators, they still have NO LAWFUL RIGHT to countermand the Constitution, nor to violate the God-given Rights of We the People. God-given Rights are granted to the INDIVIDUAL, and Constitutionally protected as such, NOT to any collective.

If the above named entities decide to issue “suggestions” or “advice” or “guidelines” on such things as “social distancing”, “shelter in place”, “stay home”, “isolate”, “self-quarantine”, “wear a mask”, they are free to do that. People can decide for themselves which of these (if any) to voluntarily observe.

They are most certainly NOT free to issue arbitrary edicts, to force people to follow any of these policies.

They are NOT free to prohibit people from attending church services; from gathering in a public park, or anywhere else.

They are NOT free to issue mandatory edicts, such as, you MUST wear a mask in public, which the tyrant, and leftist lunatic, Andrew Cuomo, has already done here in NY state. He thinks he can use the people of this state as guinea pigs. WRONG, DEAD WRONG, ALL WRONG.

They are NOT free to arrest pastors for holding church services, nor to arrest Christians who choose to attend, whether inside a building, or in a parking lot, or in their own cars.

The choice to attend church services and to have fellowship are most certainly essential to Christians. It's called Religious Liberty.

They are NOT free to arrest citizens for not maintaining a 6-foot distance in a public place.

They are NOT free to decide for We the People which products or services are “essential” or "non-essential".

This is madness. It is pure evil. It is UNConstitutional and anti-Christian.

This is the united States of America, a Constitutional Republic under the Rule of Law.

Don't let the tyrants destroy this country and the lives, the future, the Precious Liberty, of We the People.

Only We the People can stop them!

Here are some videos which provide vital information, coming from various perspectives.

Please take the time to view at least some of these presentations and decide for yourself if the information is valid and helpful. Then, take action to defend your rights, those of your family, your children, your grandchildren.

Alex Answers Your Coronovirus Questions | Behind The Deep State

From government terrorizing Easter Sunday church goers, to possible forced vaccinations, Alex Newman discusses all this and takes viewers questions in this special live episode of Behind the Deep state.

The Gates Of Hell Will Not Prevail Against The Righteous


What in the world is actually going on? Document reveals plans, step by step.


California Police STAND DOWN After Marine Vet Challenges Their Integrity

THE MOST IMPORTANT VIDEO IN THE WORLD

Police Officer Compelled To Speak Out Against Tyrannical Enforcement