FOR THE LOVE OF ANIMALS: Photos, Reflections & Stories

O, heavenly Father, protect and bless all things that have breath;
guard them from all evil, and let them sleep in peace.

Hear our humble prayer, O God, for our friends the animals,
especially for animals who are suffering;

for animals that are overworked, underfed and cruelly treated;
for all wistful creatures in captivity that beat their wings against bars;

for any that are hunted or lost or deserted or frightened or hungry;
for all that must be put death.

We entreat for them all Thy mercy and pity,
and for those who deal with them we ask a heart of compassion
and gentle hands and kindly words.

Make us, ourselves, to be true friends to animals,
and so to share the blessings of the merciful.

I've loved animals since childhood. Not only have they been among my greatest friends and companions, they have been the focus of my activism and advocacy, ever since I was old enough to lend them my hands, and to express, not only to them, but to anyone who would listen, what was in my heart.

I decided to start this series of articles, which will be ongoing, to share my lifelong passion for those of God's creatures whom I have known, and some whom I wish I could have known.

The series will include photos, of my companion animals over a period of years, of those of my friends and family. Photos of demonstrations, protests, marches on Washington, D.C., in some of which I was arrested for my activism, though never convicted of any crime.

(Is it a crime to love animals? You certainly might think so, considering you can be arrested for defending them from abuse.)

There will be articles I have written, editorials for newspapers, periodicals and whatnot.

So I will state up front: I believe animals have rights. Not just “welfare”, as controlled and decided by human beings. I believe they have souls. Animals are vibrantly sentient creatures, they have feelings, they have a love of life, and a desire for self preservation. They think, they dream, they have various forms of intelligence that are rarely, by most human beings, even imagined. They are capable in many cases of as strong a love and loyalty as any person.

One reason that animals have not been accorded the most basic rights in most societies is that they have no 'legal' standing of “personhood”. A corporation is considered a “person”, but not an animal.

I've done all in my power to change that, and will continue until the day God sends the chariot to take me home.

I know that some of my regular readers are animal lovers and/or animal rights activists. I hope they will enjoy this series as much as I will.

I adopted Angel in November, 2015. Friends from my church found her for me, at a vet's clinic not far from where I live.

After my beloved Kyra passed away in June, 2015, at age 15, I lived for 5 months without a companion animal, this being the longest period of time in decades when I hadn't had at least one animal living with me. My largest 'herd' of cats at one time was 9 precious feline friends, of which Kyra was the youngest.

I searched for animals in the shelters and rescue operations online, thinking it might be best to adopt an older male cat, someone who was of a sedentary nature, perhaps, a fellow senior citizen. But I didn't have the money for the adoption fee, so I waited and prayed that the right 'person' would somehow appear.

And sure enough, she did. She wasn't an older male, not a senior citizen like me, and she is anything but sedentary. But as it turned out, the perfect companion for me.

My friends sent me a photo of her which they'd taken at the vet's clinic. She was alone, the last of the kittens who needed a home. I then went to visit her at the clinic, one day after church. The first time I could only see her through the front window, as it was Sunday and the clinic was closed.

The next time I went inside and was able to speak with her. She was six months old, gorgeous, friendly and affectionate, and I could not believe that no one had adopted her. She had been there for months, no takers. She must have been waiting for me.

My friends paid the adoption fee, for all her medical needs, and gave me a generous gift certificate for food and other supplies. God bless them!

I was now the proud grandmother of a beautiful little girl. I named her Angel. Her birthday is in the month of May, now one year old. 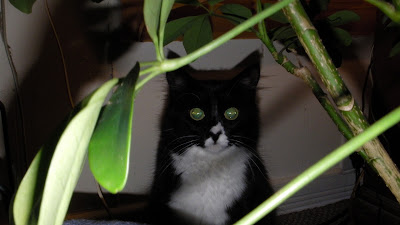 Angel aka “The Hooligan”

Her motto: “My way or the highway”

FOR THE LOVE OF ANIMALS

More photos and stories to come...
Posted by Curriculum Vitae at Monday, May 16, 2016