FOR THE LOVE OF ANIMALS (2)

“The assumption that animals are without rights and the illusion that our treatment of them has no moral significance is a positively outrageous example of Western crudity and barbarity. Universal compassion is the only guarantee of morality.”

In this second article of the series, the focus will be on the rescue of animals from unfortunate (or dangerous) circumstances, where acts of compassion and love saved a life, gave them a better life and a good home.

It wasn't until I received some photos of the animals featured here from my sister and discussed them with her that I recalled that each of them had been a rescue story, of one kind or another. Some of the animals I have known; others I hadn't the chance to meet, due to geographical separation between me and my sister for a period of many years.

My sister Irene loves animals, as I do. She is an advocate who has worked to rescue animals and find homes for those who languish in shelters, and has adopted many animals throughout her life.

I'll start with a few stories of animals she has rescued and adopted. 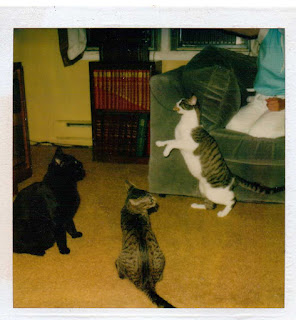 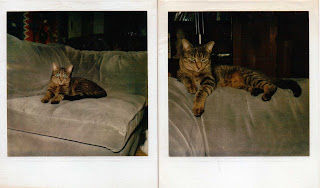 Beanie was a cat rescued by Irene. She and a friend were out one day bicycling near a reservoir when they saw a tiny kitten struggling at the edge of the water. He was soaking wet, his fur sticking up in spikes. My sister said he was “as skinny as a beanpole” which was the reason he got the name.

Irene heard the voices of some men nearby, and saw 2 men walking away into the woods. She thought it was probable that Beanie was thrown into the water to drown. But when she found him, he had somehow managed to make his way nearly out. All she had to do was pull him up and dry him off.

Irene adopted him and gave him a home, where he was loved by all who knew him.

Beanie was very sociable. He made a habit of rising with the sun, going outside every day around 6 AM. (Which meant Irene had to set the alarm clock to let him out. I must say, that would be too much, at least for me.)

In the yard, he would conduct his daily neighborhood watch, to greet various neighbors, all of whom were friendly to him. Each neighbor told Irene that he/she felt there was a special personal relationship with Beanie.

But one neighbor turned out to be unscrupulous. When Beanie was 2 years old, he was abducted by one of his “admirers”. He had told my sister that he believed the cat really wanted to live with him. He told Irene that he would be moving away from the area and asked if he could take Beanie with him. Of course, my sister said no. She loved him, and he already had a good home, where he had relationships with 2 other cats, Malvolio and Rahab.

But the neighbor disregarded Irene's answer and took matters into his own hands. He simply absconded with the cat and Irene never saw Beanie again. As Irene stated, the day the neighbor moved, Beanie disappeared.

The way I saw it was that although he had insisted that he “loved” Beanie, that was no excuse for what he did. If you really love an animal, your first priority would be HIS wellbeing and happiness, rather than getting what you want, at the expense of others. The same holds true for human beings, but animals, like children, most often have no power to make the choices which would best serve their own interests. And although they do “speak” it is not in a language that most people understand. Or maybe, they're just not listening.

To anyone who truly loves animals, once adopted, they are family. An adoption of an animal should be for a lifetime –till death do we part. And that certainly was the intention, as far as Irene was concerned.

Irene told me she hoped Beanie had a good life, that was the most important thing to her. I hope so too, but I know I could not be as charitable in my sentiments about a person who stole a piece of my heart. 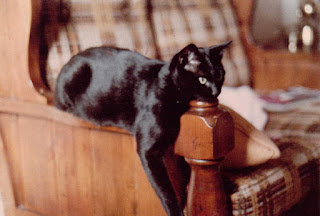 Irene once worked at a residential home for boys, from which she rescued Malvolio as a kitten.

I don't think I need to go into detail about the way emotionally damaged adolescents can treat an animal. Malvolio was most likely “dumped” there by irresponsible people and left to fend for himself.

I knew and loved Malvolio, who lived to be 16. He had the heart of a lion and was a courageous protector of the young (including his own) and defenseless.

In future articles there will be photos and stories of Malvolio's friends and relatives, Shulamith, Shulamite and Euphrates (all of whom I adopted). 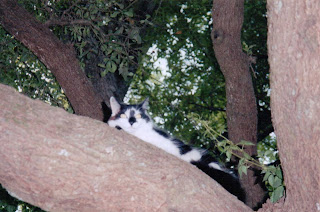 Shortly after Malvolio passed away, Irene adopted Weasle from an “animal control” shelter. She told me that Weasle chose her by reaching out her paw and hooking her claws into her sleeve as she passed by the cages.

Irene could not ignore the summons. She took Weasle home that day.

The amazing thing about Weasle is that she was adopted in 1997, at which time she was full grown (age unknown) and so must now be over 20 years old.

I remember reading something about the oldest known living cats, one setting the record at age 26.

The oldest cat I ever had was Aphrodite, who lived to be 18. But that's a story for another time. 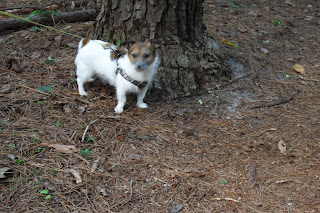 Irene adopted Mina from a breeder. It was not a puppy mill, but Mina was kept for the first 5 years of her life in an outdoor pen.

Mina didn't have the chance to run free, and never had a loving home until she was rescued by Irene.

Mina's favorite activities are going for walks in the park, and riding in the car. She especially enjoys the walks where she can meet and greet other dogs, some of whom she has got to know, as they are 'regulars' at the parks.

I've never had the chance to meet Mina (though I hope to), but I've talked to her on the phone many times and she is in my prayers every night. 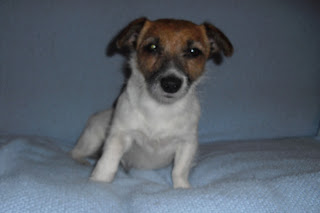 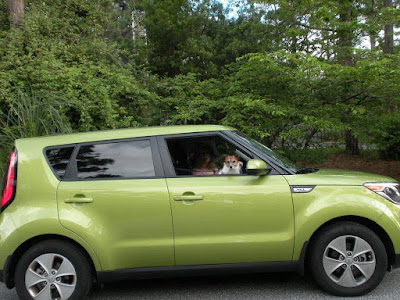 Mina, enjoying a ride on the way to the park 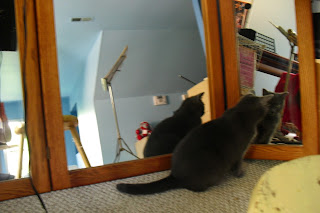 One morning Irene heard the sound of a piteous mewing outside the window. So she went out and searched for the source. The cries were coming from beneath her car. There on the ground was a small kitten, whom she was able to identify as a Russian blue. It took some time and coaxing, but Irene managed to get Stro to come out from under the car. She offered food, and placed a blanket out.

It took a few days for Stro to make herself at home. When she first came into the house, she was hiding, but always came out when dinner was on the table. (Nobody can hide like a cat, as I've learned to my dismay on countless occasions.)

But once Stro settled in, she more or less took over and commanded the attention and homage she craved, and which she'd absolutely no doubt to which she was entitled. She usurped the best spots for lounging, the most comfortable beds for naps, and even the food served to the others in the home. Long live the Queen! 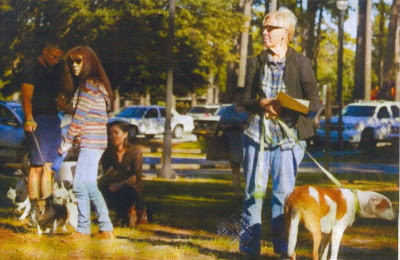 Irene (left) with Mina at The Blessing of the Animals

We must fight against the spirit of unconscious cruelty with which we treat the animals. Animals suffer as much as we do. True humanity does not allow us to impose such sufferings on them. It is our duty to make the whole world recognize it. Until we extend our circle of compassion to all living things, humanity will not find peace.