For those who missed the live program, please listen here:

We share our memories, personal, professional and beyond, of a brilliant investigative journalist, courageous activist and fiercely loyal friend, Sherri Kane. As we all agree, Sherri was an Angel, and a blessing to those so fortunate to know her. 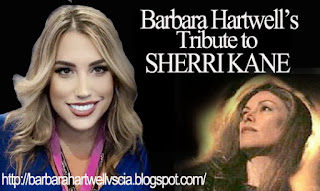 I would never have said any of this on the air, as it would have been extremely inappropriate, and I did not want Sherri's memorial tribute to be ruined, but for the record I find it necessary to say it after the fact, as it has been bothering me ever since.

There was one very serious problem with this radio program, as far as I am concerned. A person named Vincent Blasone gate-crashed the show. “Vinny” aka “VinnyBdaTruth” (how idiotic!) as he calls himself, is a long-time accomplice of one Howard Nemaizer. Nemaizer is a pathological liar, extremely aggressive busybody, petty criminal, government stooge and all around despicable reprobate of the lowest order, who is responsible for massive losses and damages to Barbara Hartwell. A long list of Nemaizer's civil and criminal offenses against me have been published in reports on this site.

Late Night in the Midlands, hosted by Michael Vara, is a live, call-in program. Normally my policy is not to do live radio with audience participation (without fail, there are always hecklers and COINTELPRO stooges calling to disrupt my interviews), but I made an exception because this was for my dear friend, Sherri Kane, and because Michael Vara and Len Horowitz are also friends and colleagues whom I had worked with in radio for over a decade. But the last thing I expected was to receive such a call, from an accomplice of Howard Nemaizer, the enemy of Barbara Hartwell and Sherri Kane. Nemaizer himself, coward and liar that he is, would never have dared to call in to a show where I was on the air.

Some background for clarification: About a decade ago Nemaizer started a little amateur podcast which he called TRUTH TALK NEWS. In reality, more like TRASH TALK NEWS, where he simply parroted crackpot conspiracy theories he found on the Internet. He also scavenged material from legitimate people (including Barbara Hartwell, Len Horowitz and Sherri Kane), but exploited our names for self-serving purposes, and added his own embellishments and hyperbole. He is a coattail-rider and gate-crasher, attempting to make a name for himself by latching on to genuine whistleblowers and professional journalists.

Characters of Nemaizer's ilk are a dime-a-dozen and have inflicted massive damages with their aggressive interference, defaming my name and in attempts to discredit my work.

Len and Sherri called in to one of his programs where Nemaizer was interviewing a very well known government shill, the late Anthony Hilder. Hilder was a crony of the late FBI Chief and COINTELPRO Kingpin, Ted L. Gunderson. Hilder and Gunderson promoted prolific slander against Barbara Hartwell over the airwaves, and later also targeted Horowitz and Kane after he and Gunderson were exposed as counterintelligence agents in our reports.

Len and Sherri called to inform Nemaizer that Hilder was anything but legitimate, but rather a large-scale promoter of government-sponsored disinformation, of which Nemaizer was totally ignorant (naturally).

As it happened, “Vinny” was Nemaizer's co-host on their amateur hour podcast run by these two buffoons. When he called in to Michael Vara's program, he failed to mention this glaring truth and tried to cover his dishonesty and complicity with referring to Nemaizer only as “my partner”. He would not have dared to name him, for if he had, I would not have been able to restrain myself from calling him out on the air.

Vincent Blasone was well aware that Nemaizer had been publicly denounced by Barbara Hartwell, and later by Sherri Kane and Len Horowitz, for his outrageous lies and libelous, injurious falsehoods against Barbara Hartwell, spread all over the Internet by his like-minded government stooges and criminals. But did he care? Absolutely not.

Nemaizer had promoted a slander fest on Facebook, against Barbara Hartwell, in which a mob of busybodies and gossips took part, including Vincent Blasone. When Sherri Kane stood up in my defense and exposed Nemaizer for the liar and fraud he is, Nemaizer maliciously attacked Sherri, accusing her of being COINTELPRO, and calling her “COINTELPRO girl”, adding a string of obscenities to his tirade of invective...F--- you! And so on and so forth...

(See reports below for evidence.)

So make no mistake: Vincent Blasone knew all about this debacle. I don't know if he called in to Sherri's tribute, put up to it by Nemaizer, or if he decided on his own that, as the unscrupulous opportunist he is, he would just barge in to add his irrelevant comments, seeking publicity for himself. He claimed Sherri had been a “friend” of his. And misrepresented the situation entirely under false pretenses, and purposely omitting the truth. Vincent Blasone had never had any part whatsoever in the investigative work or journalism of the hosts, or guests, which we discussed on the program, any more than had Howard Nemaizer, both being rank amateurs.

He took up an inordinate amount of time on the broadcast, given that he hardly knew Sherri, even way back when, and to my knowledge, there was nothing even close to that which could be called a friendship. Add to this that Sherri knew all about Blasone's “partnership” with Nemaizer and did not approve in the slightest, given what she knew about the grievous wrongs Nemaizer had done to me.

In fact, both Len and Sherri have publicly denounced Howard Nemaizer for his gross misdeeds.

I never said a word to the interloper, Vincent Blasone, nor did I respond to any of his remarks, even when he had the effrontery to use my name. I ignored him, biting my tongue, though my blood was boiling with outrage.

It is very important that I make it clear that Len Horowitz or Michael Vara are in no way to blame for the gate-crashing and promotion of false information by Vincent Blasone. They were gracious to everyone, and after all, this was a memorial tribute, not meant to turn into a brawl. I must admit, had I been the host of the show, I would have simply hit the DELETE button, thrown this clown off the air without a word, and let the chips fall where they may.

But I want it on the record, that the truth should be known, that any friend/accomplice of Howard Nemaizer should be shunned and publicly denounced for his part in the outrageously wrongful and wicked behavior of Nemaizer, by promoting, supporting or endorsing the reprobate Nemaizer in any way. By my standards, the friend of my enemy is my enemy, for any part they play in injurious offenses against me or my friends and allies.

To this day, Howard Nemaizer and Vincent Blasone are still accomplices in spreading false information and crackpot nonsense on the infamous sites, Howard Nema dot com and TRUTH TALK NEWS.