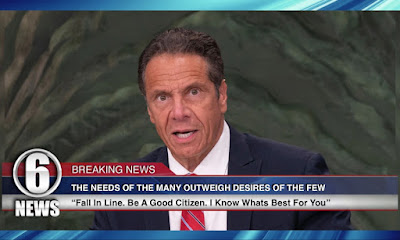 (Image courtesy of an astute reader)

I have lived in Rhinebeck, NY since January 2014. Before the panic began in March, 2020, I was a regular customer at several local stores.

Over the past 10 months, it has become increasingly difficult to shop for basic necessities, for those of us who refuse to be muzzled, especially we who suffer from medical conditions, whose health is at serious risk from wearing a mask. I, a disabled senior citizen, am one such person.

I have a badge, worn on a lanyard, which states:

Wearing a facemask poses a serious health risk to me

Under the Health Insurance Portability and Accountability Act (HIPPA), I am not required to disclose my medical conditions to you.

I am exempt from any local or state regulation mandating facemask usage in public.

The Americans with Disabilities Act provides that organizations and businesses can be fined up to $75,000 for the first violation and $150,000 for any subsequent violation.

I have always tried to support local small businesses, when possible, wherever I have lived. Usually, the quality of the products and service are superior to the large chain stores, and you get to know the owners and employees, who express true appreciation for your patronage.

All that has changed as a result of the local, State and Fed government tyranny since the so-called “pandemic”. This is psy war and social engineering, a nefarious plot to gain total control of the populace via fear-mongering and propaganda.

Those of us who refuse to live in fear, and who stand up for our Rights are hardest hit, because we are deemed pariahs and treated as lepers by the compliant quislings who “go along to get along”, who fail to respect our Rights, and will claim they are “just following orders”. But far worse, some have become willing “enforcers” and government snitches, accosting, harassing and insulting anyone who refuses to comply with the unlawful “orders” from On High, issued by tyrants who lack the lawful authority, but abuse their position of power, simply because they can get away with it by threats and intimidation.

From my personal experience and observations, the situation, at least here in New York, has become worse and worse, by the day, since March. I have been refused admittance to, or ordered to leave, some of the small businesses which I have patronized for years. They have refused to acknowledge my lawful medical exemption when I have presented it.

So, the policy I have taken is this: Any business whose owners/employees refuse service to me, I clearly state my position and then inform them that they will lose my patronage. I will then expose them by name, including the owners/employees, in cases where I know them.

When I am accosted by employees, or patrons in the store, I will tell them in no uncertain terms to MIND THEIR OWN DAMNED BUSINESS, and in certain of the more obnoxious cases, that they can go straight to Hell.

If I am told that they are “private businesses” and so have the right to refuse service to me for not wearing a mask, I say that I will be leaving, never to darken their door again.

But I will not be treated as a leper, and so I would rather starve to death than be accosted, harassed and insulted by these cowardly little minions of Governor Cuomo's Communist Police State.

We, as New Yorkers, should support those businesses which respect our Rights. We should boycott the hell out of those who don't. They deserve to be shut down, as they have brought it on themselves by aiding and abetting the tyrants.

Here is a list of businesses whose owners/employees have used their masked-moron slaves in attempts to intimidate/control patrons of their establishments.

If anyone reading this is a local resident in or near Rhinebeck, NY, I hope you will join me in boycotting these businesses, on principle, and in defense of Liberty and God-given Unalienable Rights for one and all.

NAME THEM & SHAME THEM!