To utter a wish of evil against one; to imprecate evil upon; to call for mischief or injury to fall upon; to execrate.

To speak evil of; to utter abuse or calumny against; to speak reproachfully of.

The Elements of False Light

In a false light claim, the plaintiff must prove the following elements:

The defendant published some information about the plaintiff.

The information must portray the plaintiff in a false or misleading light.

The information is highly offensive or embarrassing to a reasonable person of ordinary sensibilities.

The defendant must have published the information with reckless disregard as to its offensiveness.


The Elements of Defamation

For defamation, the plaintiff must prove the following elements:

The defendant made a statement about the plaintiff to another.

The statement was injurious to the plaintiff's reputation.

The statement was false.

If the plaintiff is a public figure, or was involved in some newsworthy event or some other event that engaged the public interest, then the defendant must have made the false statement intentionally or with reckless disregard of the plaintiff's rights.

The clear intent of this Twitter account was to, with malice aforethought, commit (including but not limited to) the following offenses:

The injured parties are Ramola D/Dharmaraj and Barbara Hartwell.

The account was expunged on or about June 12, 2020 and this notice appeared on the page:

I cannot prove the identity of the person using the pseudonym, Robert Sau. Upon information and belief, as well as available evidence as to the content of the Twitter account, I have reason to conclude that this person is one Karen Melton Stewart, many of whose previous quotes were displayed in the entries, as well as numerous laudatory comments relating to her media interviews, writings, etc. 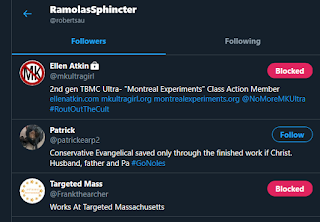 They are named as: Ellen Atkin, Frank Allen, Patrick Earp.

These individuals are hereby named as accessories/accomplices to the offenses against Ramola D and Barbara Hartwell.

Two of these individuals (Ellen Atkin and Frank Allen) have previously libeled/slandered Barbara Hartwell and Ramola D in public content.

"I have my settings set to restrict vulgar content. I just posted an American Flag that has "Remember Memorial Day" above it. It was blocked. Twitter, do you really hate America that much?"

So, Patrick Earp wants to “restrict vulgar content”? Why then, would he become a follower of “Robert Sau”, whose Twitter page is named “Ramola's Sphincter”?

At the very least, he is a hypocrite.

And no true Christian (which he claims to be) would ever be involved in supporting the action of displaying images of demons for the express purpose of harming and defaming others by placing them in a false light, motivated by malice.

On this Twitter page, Barbara Hartwell is falsely accused of being: A “CIA agent and handler of CIA asset Ramola D”. A “cyberstalking queen”. “TI Controlled Opposition”.

Also, a hideous image of a demon was stamped with the name of Barbara Hartwell over the image. I have no wish to repost that image here. The evidence is posted in my previous report (see listing at bottom of page).

The purpose of this report is to document, for the public record, the offenses of one “Robert Sau” a pseudonym for an actual offender, the architect of this Twitter page, and any and all accomplices (named and unnamed).

To state for the record that the defamation and false light, the false accusations, have inflicted extreme emotional distress; have contributed to the damages of a previously existing defamation campaign against Barbara Hartwell.

To state that others may be harmed as a result, such as minor persons (children) related to me, seeing the false accusations of “Lucifer”, “Church of Satan”, and the ghastly image of demons in connection with my name.

At present, I do not have the resources to file a lawsuit against these perpetrators. However, it is imperative that I document these egregious offenses, so that there can be no doubt as to the damages done, and as to my stand against all parties (named and unnamed) who took any part, in any way, shape or form, in these offenses.

FACTS FOR THE PUBLIC RECORD

I have never, at any time, engaged in any manner of “cyberstalking” against anyone.

I have never, at any time, been a member of any group of persons who name themselves as “Targeted Individuals” or as part of the so-called “TI Community”. I do not share their ideas, nor participate in their actions.

I have never, at any time, had any connection to the Church of Satan, nor to any Luciferian practices or ideologies. On the contrary, I rebuke them, in the name of Jesus Christ.

As God is my witness, I am not employed by CIA, nor do I recruit assets for any reason, including the falsely accused, as "CIA asset", Ramola D.

In the face of egregious libel, slander, false accusations, blasphemes, curses, gate-crashing, invasions of privacy, injurious exploitation of my name and/or images, I do not return evil for evil, nor act with malice. I simply refute the defamatory falsehoods, with facts and evidence, warn others, issue a cease and desist directive, and pray God's justice on the offenders.

I cannot speak for Ramola D. I know she is very capable of speaking eloquently and honestly for herself, as she has done. I should only state for the record that she is a good friend and colleague, nothing more. That I have never at any time taken a “bribe” from her (as accused by Karen Melton Stewart), nor have been offered one. Nor have I ever engaged in any action with Ramola, nor compensated her in any way, for any purpose related to public defamation of any individual.

In summary, I must state that I will continue to pursue justice, by any and all ethical and lawful means available to me, against anyone (named and unnamed) who has taken any part in the egregious offenses committed against me, my friends, family and colleagues.