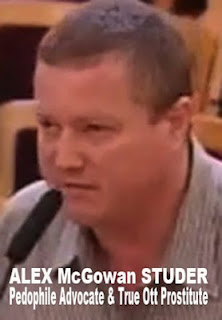 Alex Studer runs a website called Lab Virus.
http://labviruscom.blogspot.com/
Although Studer advertises the purpose of the site as "researching lab-created bioweapons disguised as "natural occurrences", toxic vaccines, and more", Studer is not a scientist, nor even a professional researcher of any kind; he has no expertise in these subjects. Mainly, the site of rank amateur Alex Studer is a platform to promote the twisted racist/white supremacist ideology and writings of a charlatan calling himself  "Dr. A. True Ott, PhD", whose real name is Alma C. Ott.
Just as Ott's name is not "True", neither has he earned the credentials he tacks onto his name. Ott, by his own admission, does not have an "accredited" PhD. And, in point of fact, there is no other kind. Nor is Ott  entitled to advertise himself as a "N.D." (naturopathic doctor), as he has not graduated from any of the few colleges which issue that degree. "True" Ott is a fraud, plain and simple.
What is Alma Ott's primary thesis, which slithers through his writings like a malignant serpent? That the so-called "Edomite Jews" aka Edomites aka Khazar Jews aka Canaanites are the spawn of Satan, the bloodline of Cain, and that as such, they are genetically flawed and thus predisposed by the very "evil" blood that runs through their veins, to perpetrate all sorts of crimes and atrocities against humanity.  According to Ott and his ilk, these "Edomites" themselves are a veritable abomination to God Almighty!
Ott has written countless articles and screeds filled with his "Edomite Jew" hate propaganda and has libeled and slandered many Jews, as he apparently believes that by their "bloodlines" alone they are deserving of hatred and venemous attacks. Among Ott's primary Targets are Dr. Leonard Horowitz  and Sherri Kane, two brillaint investigative journalists who have exposed a criminal conspiracy and COINTELPRO network of  "controlled opposition", of which "True" Ott is just one of  a number of members-in-good- standing.
As for Alex Studer, he is merely an ignorant and arrogant stooge who parrots "True" Ott and his Jew-hating accomplices, and toadies to their every whim. Studer slavishly supports, promotes and endorses Alma Ott, and jumps to his defense, no matter what he says, no matter what he does. Like a crazed weathervane, Studer spins around and around, and changes his position to "verify" and disseminate every changing ill wind of doctrine that spews from Ott's mouth. What a disgusting pair of creeps!
But for Ott's toady, the oafish Alex Studer, just hating the Jews, just libeling and slandering them, is not enough. No, he wants to destroy them by a nuclear holocaust. On his website, Lab Virus, Studer has a link to "MERCHANDISE" that he is selling to the public. 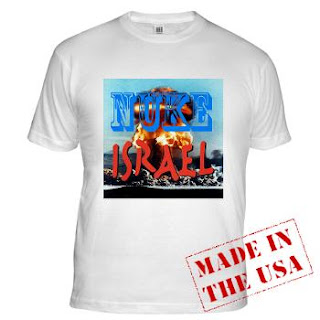 The theme of Studer's products, in just two words is: NUKE ISRAEL

On offer to his fellow Jew-haters, Alex Studer has a wide variety of NUKE ISRAEL apparel and parphernalia: NUKE ISRAEL T-shirts (including for dogs); NUKE ISRAEL mugs, wallets and jewelry; NUKE ISRAEL bibs for babies (Can you imagine anyone stupid enough to buy such a thing for a child?). And here's a great deal, Jew -haters: For just $15.99 you can be the proud owner of a NUKE ISRAEL Teddy Bear (snow white fur, naturally)....and last but not least, he even sells NUKE ISRAEL Christmas stockings.
But don't take it from me, by all means, see for yourself:
http://www.cafepress.com/labvirus
Are you feeling nauseous yet?
So, Alex Studer, by promoting his Jew-hater products, is announcing to the world that he is an advocate not only of hate, but also of violence, terrorism and murder. He has murder in his heart. If Alex Studer was given the lawful authority to "push the button" and annhilate an entire country, millions of human beings and other creatures, would he have any compunction? Apparently not.
So, with that in mind, let's take a look at what NUKING ISRAEL would actually mean. For starters, here is a brief description of the effects of a nuke.
Effects of Nuclear Explosions
SOURCE:  http://en.wikipedia.org/wiki/Effects_of_nuclear_explosions
Acting on the human body, the shock waves cause pressure waves through the tissues. These waves mostly damage junctions between tissues of different densities (bone and muscle) or the interface between tissue and air. Lungs and the abdominal cavity, which contain air, are particularly injured. The damage causes severe hemorrhaging or air embolisms, either of which can be rapidly fatal. The overpressure estimated to damage lungs is about 70 kPa. Some eardrums would probably rupture around 22 kPa (0.2 atm) and half would rupture between 90 and 130 kPa (0.9 to 1.2 atm).
******************************
HIROSHIMA VICTIM 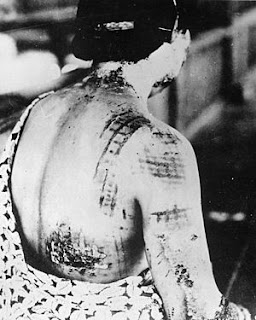 Okay, so Alex Studer wants to subject millions of people to a horrific death, or condemn them to being maimed and traumatized for life, simply because they are Jews who live in Israel. What about the children? Can anyone who is a parent and/or grandparent imagine what it would be like to know that a little boy or girl whom you love with all your heart would be subjected to such an atrocity? What if you yourself are --or are not-- Jewish, but have relatives who live in Israel? How would you feel about Alex Studer's nefarious plot?
And what about the animals? Anyone who loves animals would be grief-stricken as well. Does Alex Studer really mean what he is saying? Or is he just shooting his mouth off, as usual, trying to present himself as a "tough guy"?
Either way, there is simply no excuse for promoting murder and mayhem, for inciting violence and terrorism, for that is precisely what he is doing.
No doubt, Alex Studer will remind us that he has "freedom of speech". True, but so do the rest of us.  So, for all the decent, law-abiding people whose integrity and humanity will not allow them to remain silent in the face of such murderous hatred and lethal intent, please, for the love of God, let this lowlife criminal know what you think of him!
Now let's take a look at some of Alex Studer's writings in support of his "hero", Mr. A. "True" Ott. Recently, Ott was acccused of plagiarism by someone who posted comments on his website. The allegation was that Ott plagiarized the work of Neale Donald Walsch, a new ager  best known for his anti-Christian  book, Conversations with God. Ott denied being a plagiarist, but then came up with a ludicrous explanation for the obvious truth of the charge, after it was shown that Ott's writings were in some places the exact sentences, word for word, and even the same misspellings, as written by Walsch.
Ott, after hemming and hawing, trying to explain away his theft of Walsch's writings, finally  "admitted" that he had "plagiarized" the "words", because in truth, they were spoken to him by Jesus Christ! He said that both he and Walsch must have "heard" the same words from "Jesus"...I mean, really, could it get any stupider?
Ott then attacked the person who caught him red-handed in plagiarism, calling him (you guessed it) "Edomite troll".
http://atrueott.wordpress.com/2012/02/08/edomite-internet-trolls/
Naturally, Alex Studer jumped to Ott's defense. Here, some excerpts from Studer's article:

A. True Ott PhD is a PLAGIARIST (sic)

http://labviruscom.blogspot.com/2012/02/true-ott-phd-is-plagiarist.html
"That's right folks you heard it here first, maybe second, because he freely admitted it on his 9 Feb 2012 broadcast, and I agree indeed he is a plagiarist."

"You see, the reason is that while he has been channeling all of these words of Yeshua and Jesus, he has failed to give due credit and instead has signed his own name, time after time, to his blog posts and the ever-increasing volumes of published papers he has submitted over the years."

remove that figure from the agreed-upon 7bil figure that leaves 6.86 billion people who are NOT of the Edomite bloodline, many of whom are Christians.

Do the math folks.

These satanists, in all their worldly flavors, are VASTLY outnumbered.

Pray, all."
Golly gee, those pesky Edomites again! Better start praying....
But Studer isn't finished yet... MORE Edomite madness!
"I just happened to meet Michael Savage personally tonight.  Besides his ranting on about pro-Israel support I just couldn't take my mind off the giant hook nose on the guy's mug, the signature of the Edomite bloodline.

He had the balls to ask me "what's an Edomite" and when I told him he instantly resorted to labeling critics as Jew-haters.

Nuff said."
"He asked me about some of my research and I spoke of Edomites, and he asked "whats an edomite" and I explained its a descendant of Esau not Jacob, he rolled his eyes and said "so you mean jews" then changed the subject and began saying things very pro-israel.  I left him my flyer and invited him to call me - not like im expecting him to.  Im noticing edomites like to dress in all black head to toe, many with the jew-rimmed fedora."
Finally, in this latest article, Alex Studer once again attacks Horowitz and Kane:
http://labviruscom.blogspot.com/2012/03/horowitz-and-kane-continue-their.html
This article was accompanied by a Lab Virus radio program hosted by Alex Studer. Because he announced on his website that the show was about Horowitz and Kane and their "attacks" on "Dr." Ott and Studer himself, I decided to listen to it. What a waste of time! This clown couldn't "host" his way out of a wet paper bag. Or maybe it's just because Studer has a "face made for radio"...that would explain a lot. But unfortunately for him, his voice isn't made for radio. He sounds like a high school student broadcasting out of his parents'  garage. He mumbles, stumbles, and every other word is, "um". He can't even string a sentence together. What a parading idiot!
Studer claimed that he and Ott must have "hit the nail on the head" in "exposing" Horowitz and Kane.... "methinks they protest too much". He also had to throw my name in there as well (along with a false name he attributed to me), with his usual vulgar comments.
This, because Horowitz and Kane have gathered a large body of evidence to support the facts: That "True" Ott, his toady, Alex Studer, along with a number of other COINTELPRO stooges (Todd Brendan Fahey, Timothy Patrick White, "Xena Carpenter", Craig Oxley, James F. Marino, Ken Adachi et al, are involved in a criminal conspiracy which includes racketeering, identity theft, plagiarism, blackmail, extortion, monstrous invasions of privacy, soliciting crimes against Targets, massive libel and slander campaigns against designated Targets.
These criminals, with murder in their hearts, are destroying people's lives! Sherri Kane, Dr. Len Horowitz and Barbara Hartwell are only three of the Targets. And we have had enough!
This gang of criminals, these malicious liars, Jew-haters, white supremacists, misogynists, these sex perverts/predators, porno freaks, pedophiles and protectors of same, belong behind bars!
If they think they can hide behind their mask of "Bible Believers" and "Christian Brothers", or their claims of "the love of Jesus", or "chanelling the 'truth' of Jesus" they are way out of their depth and out of their twisted, hate-filled minds.
For those who want the truth and the facts, please see:
http://web.mac.com/len15/TrueOtt.com/Plagiarist_%26_Extortionist.html
By their fruits shall you know them.
Barbara Hartwell Percival
March 5, 2012
Barbara Hartwell Percival
Legal Defense & Research Trust
PO Box 22
Old Orchard Beach
Maine 04064
Barbara Hartwell Vs. CIA
http://www.barbarahartwellvscia.blogspot.com
Posted by Curriculum Vitae at Monday, March 05, 2012