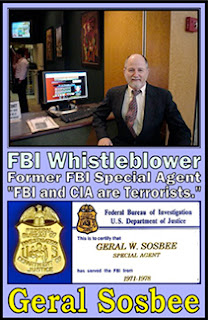 Today I received an e-mail message from my friend, former FBI agent Geral Sosbee, regarding former FBI chief and COINTELPRO Kingpin Ted L. Gunderson. Geral and I subsequently discussed (with great outrage!) via telephone, the extreme damages which Gunderson continues to inflict on legitimate whistleblowers and expositors of government crimes and corruption.
Gunderson, a former friend and professional colleague, whom I worked with for three years (1997-2000) began his massive COINTELPRO libel/disinformation campaign against Barbara Hartwell  only a few months after I broke off my association with him.
Ted Gunderson has also targeted Geral Sosbee for libel, and listed him, along with Barbara Hartwell, among the so-called "government spooks" who are spreading "disinformation" about Ted Gunderson.
But let's get real.  For those interested in the truth about Ted Gunderson, here  (Exhibit 1) is Geral Sosbee's report (2005) republished today, followed by (Exhibit 2) an excerpt from a report by Barbara Hartwell, titled:

In early 1971, the FBI's domestic counterintelligence program (code named "COINTELPRO") was brought to light when a "Citizens Committee to Investigate the FBI" removed secret files from an FBI office in Media, PA and released them to the press. Agents began to resign from the Bureau and blow the whistle on covert operations. That same year, publication of the Pentagon Papers, the Pentagon's top-secret history of the Vietnam War, exposed years of systematic official lies about the war.
See examples of the mind games by Ted Gunderson as he attempts to misrepresent and verbally attack the very persons whom the FBI and CIA seek to torture, imprison or kill (note Gunderson's perverse use of the word 'disinformation' in his disinformation campaign):
http://sosbeevfbi.ning.com/forum/topics/elaborate-efforts-by-ted 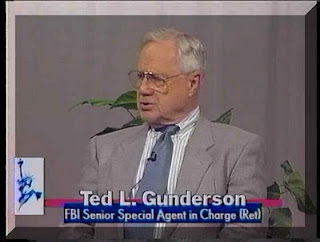 
[I. Counter Intelligence Operation
Organize a select group of trusted, loyal Americans to operate an effective legal counter-intelligence operation. The goal of a counter-intelligence operation is to educate and, in some instances, to disrupt the enemy by mailing anonymous letters to selected individuals and groups in order to create distrust and paranoia. Another goal is to furnish disinformation and create confusion. I was a counter-intelligence expert in the FBI and I am aware of numerous techniques with which to work towards this goal. I wish to emphasize we will not conduct any criminal or illegal activity, nor violate any laws. All activities would be legal. There are other techniques than can be used, in addition to anonymous letters, i.e., telephone calls from public telephones. Disinformation can also be spread on radio and television talk shows.]

And by the way, there is nothing "legal" about fraud, criminal stalking, identity theft, extortion, criminal harassment, death threats, murder-for hire schemes, inciting violence and terrorism..... this operation is a criminal conspiracy par excellence, rife with most every crime imaginable. Racketeering at its finest.
As for the privacy invasions and the libel/slander campaigns against targets, I guess you might stretch it to say these are "legal". After all, these are civil matters.