Sherry Peel Jackson: What Ron Paul Did For Me 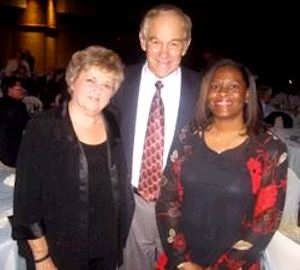 NOTE: Here is the latest newsletter, April 2012, from Sherry Peel Jackson. I consider Sherry to be an American Hero, as do many others who stand for Liberty and God-given unalienable rights, as protected under the U.S. Constitution.

Rather than just give the link to her newsletters, I post them in their entirety, with Sherry's kind permission.
BHP
April 18, 2012
http://www.sherrypeeljackson.org
Sherry Peel Jackson: April 2012 Newsletter

What Ron Paul Did For Me

Many of you don’t know that Ron Paul played a part in my rescue when I was in prison. First, let me say that I met Ron Paul a couple of times before I went to the slammer, and he and his wife were gracious and warm. Even though we didn’t get together during the filming of Aaron Russo’s movie America: Freedom To Fascism, both of us were featured in the movie.


When I was ill in late 2009 there was an outcry after people were informed of the severity of my condition. I had written a letter to my U.S. Congressman (Hank Johnson) via prison e-mail, and forwarded it to my husband to deliver to him since the congressman was not on my approved e-mail list. My husband, without editing the letter, sent it out to about 20 supporters after furnishing a copy to the congressman. These supporters were outraged at what I was going through. At least one of these supporters had a large e-mail list and he forwarded the letter to his entire list. That desperate cry for help went viral, and soon I was receiving letters of encouragement and financial support from literally all over the globe.


Someone got in touch with Ron Paul’s office. I don’t live in Texas, but he and his staff took action and contacted the prison with a demand for information about my situation. Shortly after Ron Paul’s inquiry about my treatment I was shipped away to a high security prison. While in solitary confinement there (for the security of the institution, they say) my medical situation was constantly observed, and I was treated with respect by the medical staff.


Along with Congressman Hank Johnson, I believe that Congressman Ron Paul’s eye on the situation got me the care that I needed so that my condition did not go critical. I was in really bad shape as you can see here. 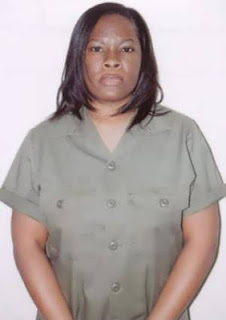 For those that say that Ron Paul is a racist, you would never be able to convince me of that. His actions speak louder than your words. He has delivered thousands of lives into this world, of all races and colors. He has helped people of all races, even when it was not popular and could have put him and his family’s lives in danger.


For those that say that Ron Paul is a nut, a large oak tree is yesterday’s nut that held its ground. For over 30 years Ron Paul has not switched his position on any of the socio-political issues of our day. You can call him a nut if you want, but at least he’s not a flip flopper that changes his position with the ebb and flow of the masses.


For those that say that Ron Paul can’t win, God says nothing is impossible with Him. His sticking to his guns and staying in the race shows me that he cares not only about his own family, for he could have made a fortune and bilked the country, like others. He could have taken bribes, high paying corporate positions or even created policies that would have enriched him and his family for generations to come. Instead, his stick-to-it attitude shows me that he cares about me, about us, about America as a whole, about the rule of law, about justice, about equity. Very few people in power care about you, I hope you understand that fact.


Ron Paul takes the criticism and the flack, the jokes and the insults because he knows who he is and he knows what God has told him to do. He knows that he has the truth on his side, and sooner or later truth will prevail. He has been a beacon in the darkness, one that shows up the evil that is in our country and shows the way to correct it, to the chagrin of the evildoers.


I sent a thank you letter to Ron Paul’s offices in Texas and in DC. I wanted them to know that I appreciate them reaching down to help a lowly prisoner that was afraid for her life. Life, that is important to us as humans, or at least should be. Do the people that you trust and endorse care if you live or die? Selah (pause and think about that).
***********************
Barbara Hartwell Percival
Legal Defense & Research Trust
PO Box 22
Old Orchard Beach
Maine 04064
Barbara Hartwell Vs. CIA
http://www.barbarahartwellvscia.blogspot.com
Posted by Curriculum Vitae at Wednesday, April 18, 2012