Painting Jews with a Broad Brush in search for Criminal Zionism 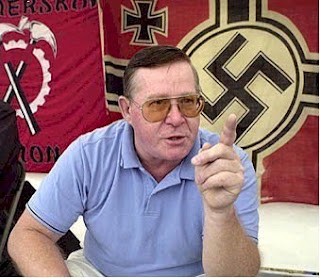 James Wickstrom: Rabid Jew-Hater
Aired on April 1, 2012 (prerecorded) is a radio program hosted by James Arthur Jancik (aka The Black Knight of Radio), with guests Janet Phelan and Barbara Hartwell.
To listen go to:
http://innersites.com/feet2fire/index.html
Phelan and Hartwell are on the second half of HOUR 3, and entire HOUR 4 of the April 1 broadcast.
Janet Phelan has Jewish blood on her Mother's side and has been the Target of bigotry in the so-called "patriot" community. The veracity of her work has actually been questioned by some of these rabid Jew-hating bigots, simply because she is a "Jew".
I've seen the same thing happen to other journalists/whistleblowers and I find it absolutely sickening!
As for me, I'm not Jewish. However, one of my longtime "crusades" has been exposing bigotry against ANY race/ethnic group, religious affiliation, gender. As a print and radio/TV journalist, I write and speak about these issues frequently, with the goal of educating people and in the hope of getting them to ask themselves the question: WHY?
What is the real agenda of those who promote bigotry and hate?
How does this agenda tie into counterintelligence programs?
Who benefits from the dissemination of hate propaganda against "the Jews"?
We address these questions and also discuss the issue of psychopathy, which many of us concerned with these issues consider to be the actual root of the problem of bigotry and hate towards any number of groups.
Here is a summary written by the host of Feet to the Fire, James Arthur Jancik:
http://innersites.com/feet2fire/index.html
Painting Jews with a Broad Brush in search for Criminal Zionism
When investigating Criminal Zionism, one must be careful not to lump anyone together due to race, color, creed, religion, nationality, etc. It is all about psychopaths. They come in all flavors. They care only for themselves and will throw anyone under the bus to achieve their goals. Psychopaths hide as Jews and use the ADL to run interference and use guilt and manipulation to keep people away.
Psychopathic Pedophiles can hide as Catholic Priests, wrapped in the robes of their vows to Jesus Christ, all the while using that cover and power to sexually assault children.
Politicians, venture capitalists, police, judges, rabbis, pastors, child care workers, psychologists, media moguls.. etc... etc... etc... Hiding in plain sight by the absurdity of those sacred and trusted positions being used for platforms of the darkest evil toward those they swore to serve.
We will talk tonight about his and how may used the excuse of seeking Criminal Zionists to vent their bias against Jews.
Guests:
Janet Phelan -Author, Investigator, Whistleblower
Janet Phelan is an investigative journalist with over twenty years in the saddle. Her articles have appeared in the Los Angeles Times, the Santa Monica Daily Press, the San Bernardino County Sentinel, the American's Bulletin, Oui Magazine and elsewhere. She is best known for her article "Water As A Weapon" and her investigations on the war against the elderly and vulnerable through the conservatorship and guardianship programs in State Superior Courts. Janet was educated at Grinnell College and U.C. Berkeley, and studied journalism at University of Missouri -Columbia Graduate School of Journalism. Her first book, "The Hitler Poems," was published in 2005.
http://janetphelan.com/
http://www.activistpost.com/2011/08/our-spiritual-leadership-stumbles-and.html
Barbara Hartwell -Ex-CIA Whistleblower
Find curriculum vitae on this site:
http://www.barbarahartwellvscia.blogspot.com/
RELATED REPORTS
http://barbarahartwellvscia.blogspot.com/2012/03/upsurge-of-bigotry-and-anti-jewish-hate.html
http://barbarahartwellvscia.blogspot.com/2012/03/anti-jewish-propaganda-run-amok-in.html
http://barbarahartwellvscia.blogspot.com/2012/01/cointelpro-jew-haters-spotlight-on-clay.html
http://againstthewall.info/tag/barbara-hartwell/
http://barbarahartwellvscia.blogspot.com/2012/03/murder-in-their-hearts-nuke-israel.html
http://barbarahartwellvscia.blogspot.com/2011/08/theology-of-hate-defiling-message-of.html
http://barbarahartwellvscia.blogspot.com/2006/12/scapegoat-syndrome-editorial-commentary.html
Barbara Hartwell Percival
Legal Defense & Research Trust
PO Box 22
Old Orchard Beach
Maine 04064
Barbara Hartwell Vs. CIA
http://www.barbarahartwellvscia.blogspot.com
Posted by Curriculum Vitae at Friday, April 06, 2012