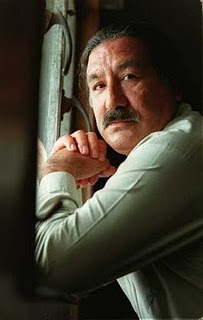 NOTE: Incident at Oglala is a film, produced by Robert Redford, which I have watched a few times. Thinking about the Leonard Peltier case, I decided to watch it again today.
And although I have been a longtime Leonard Peltier supporter, I feel I have been remiss, that I haven't done enough, that I could have and should have done more.


The way this man has been treated by the U.S. government is absolutely disgusting! My outrage started when I read In the Spirit of Crazy Horse, by Peter Matthiessen, and that book was what motivated me to take up Leonard Peltier's cause; but watching the film always has the same effect.
I urge everyone who cares about justice to view this film. It's only an hour and a half long, and well worth the investment of time.
For unless you truly understand how the federal government operates (including the FBI); until you feel the outrage as a personal affront; until you can imagine yourself and your loved ones as the victims of these atrocities, you will never be motivated to get involved, to work for justice --not only for Leonard Peltier, but for ALL political prisoners.
See the film here:
Incident at Oglala
Leonard Peltier is innocent!
Free Leonard Peltier!
Barbara Hartwell Percival
March 21, 2010
INTERNATIONAL PELTIER FORUM
March 21th 2010:
12462 days of WRONGFUL IMPRISONMENT !!!

Reactivation of the NW Leonard Peltier Support Network
Greetings All,

As in any human long term activity, there will be differences both political and personal. We are not saying that none of that is baseless. Rather we are saying here and now that differences should be put aside so that everyone who supports freedom for Leonard Peltier can aid this campaign. If everyone who supports freedom for Leonard helps out we have no doubt our effords will help free him.

Our campaign will include: education, petitions and letter writing, and when the time is right a Regional Leonard Peltier Clemency March and Rally in Tacoma.

We are looking for people who can help out. There will be many needs: getting out petitions, getting people to write letters, getting articles printed in papers, forwarding e-mail statements to friends, organizations and e-mail lists, handing out and/or posting fliers, fund raising and donations, caravans for justice (car pools), video taping the march and rally (that would be used to help support the campaign in other places), artwork, banner making and so on.

If you are willing to join with us please contact Tacoma LPSG at bayou@blarg.net.

Those who wish to sign up on the NWPeltierSupport e-mail list can do so by sending an e-mail to:nwpeltiersupport-subscribe@lists.riseup.net