Consent of the Governed, NOT!

The price of freedom is eternal vigilance.


Do not participate in the unfruitful deeds of darkness, but instead expose them.

NOTE: Former FBI agent Geral Sosbee is the leading whistleblower in America today on FBI crimes and corruption. Geral served in the FBI from 1971-1978, when he was forced into early retirement, under threat of imprisonment (having his sanity impugned), for reporting crimes inside the FBI, for being faithful to his oath to defend the Constitution, against ALL enemies, foreign and domestic, and the unalienable rights of ALL, including suspects.

How many "domestic" enemies are there in America today? As many as violate the God-given, unalienable, constitutionally protected and guaranteed rights and liberties of ANY Individual.

Anyone who does not ACKNOWLEDGE, RESPECT and DEFEND those rights, for ALL (each and every Individual) is an enemy combatant of "We the People".
I know of no other former FBI agent turned whistleblower who even approaches his record of consistent and uncompromising defense of Liberty and the principles upon which this country was founded.


Geral is also a decorated Vietnam Veteran and an attorney, a former professor of Constitutional Law.  The body of work he has published on the Internet reflects his vast knowledge and expertise on the subjects he addresses.


But more than all that, Geral's work is a clear indication of his spiritual integrity and great moral character. He has been particularly sensitive to the plight of the tortured, the wrongfully imprisoned, the harassed, the persecuted.

And so for me, it is a matter of tremendous personal outrage that this kind, decent, courageous Messenger of Truth and Defender of Liberty, this Warrior Angel of a man, has been targeted for the most brutal political persecution, by corrupt agents of the U.S. government (FBI, CIA et al) and is also being harassed, stalked, libeled and slandered by their minions and stooges.

Geral and I have been best friends and professional colleagues for more than a decade. We have spent countless hours discussing the psy war, the torture and the COINTELPRO operations, the political persecution of ourselves, our friends and allies, all of whom have been targeted by a corrupt government simply for standing up to the goons, the thugs, the tyrants attempting to steal our most precious gift: The Liberty bestowed on each Individual by God.


One of the most distressing dilemmas we face is that many people (be they friends, family, acquaintances, associates, or the general public who read our reports) just don't seem to care, or even to comprehend, the magnitude of what is happening to those targeted for the harassment, the stalking, the libel/slander campaigns.


Yesterday, after one of our discussions on these issues (addressed in the report below) Geral sent me this brief memo:

"Many people don't care, or they may think that the torture and killing of Targets & whistleblowers by fbi/cia does not affect the ordinary person; this is a complete & dangerous fallacy because the tactics used against us become (in one form or another) the same methods used to control all the people of the world."
My answer to this statement is that none of us can afford to be silent. When we become aware of offenses perpetrated (criminal or otherwise), we must expose them. We must name the perpetrators (be they individuals or government agencies).
We must hold them accountable, by any and all lawful and ethical means available to us.
Barbara Hartwell Percival
September 28, 2011
************************
Consent of the Governed, NOT!
By Geral Sosbee


Inasmuch as this government and the culture that supports it has become over time a murderous oppressor of people and nations and simultaneously continue to engage in high crimes and misdemeanors against all of the world's inhabitants, I cannot in good faith  consent to its rule.


Consent of the Governed


At one time in my life when I was much younger and more trusting in those leaders who ruled the nation, I consented to the government’s handling of social, political, and economic affairs and my role in such activities. I impliedly accepted the idea that authority vested in the agencies of government was somewhat sanctified in that all of the people must for the benefit of the world and in pursuit of peace recognize law and public policy standards as outlined by all appropriate agencies of government.


Inasmuch as government has now become unduly oppressive, murderous and inhumane (as evidenced in part by an uninterrupted string of local and global atrocities and crimes against humanity over the past century) I can no longer give my consent to be ruled by the illegitimate authority that calls itself the United States of America.

From my personal experience I find that the criminal and civil laws of this nation (and the cultural standards that support them) are impossible to honor in many instances because they are secret in their making, arbitrary in their enforcement and insufferably oppressive in their application. Such obscure laws, standards and secret rules are used by political fiat to imprison and to destroy lives of people in a kind of game where prosecutor, defense attorney, judge and citizenry all conspire to ruin, imprison or kill the individual for alleged offenses that do not approach in severity the crimes and unlawfully brutal tactics used against them by their detractors; neither do the actual offenses alleged against a  person  generally compare in degree of severity to the crimes committed against him by the accusers. Those government agents (and their paid killers in uniform or in the private sector) who seek to selectively apply their contrived and illegitimate rule of law against unsuspecting  citizens now advance against the people with unwarranted malice, tortuous brutality, and advanced cruel weaponry.


No free man who yet has an ounce of will power and self-respect may therefore submit to the completely out of control government of the United States of America. Any judgment or levy against any citizen or resident of the United States by any current officer of the three branches of government, or by any administrative agency thereof, is by definition corrupt, devoid of legitimacy and intolerable to men and women of good conscience because those who (with evil intent, malice aforethought and wickedly selfish heart) wield the bloody ax of law against our people are the real criminals far more dangerous and threatening to humanity than  the millions of men and women imprisoned under Nazi like orders of this hideous regime.


In good conscience and by the remaining will power afforded  by Providence I do not give my consent to be ruled by the present United States government because it is a global murderous and criminal enterprise bent on world inhumane domination at any cost. 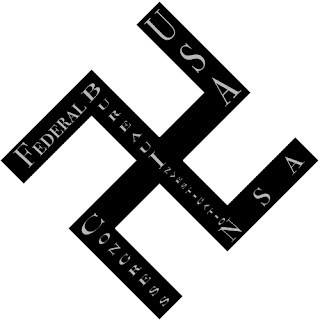