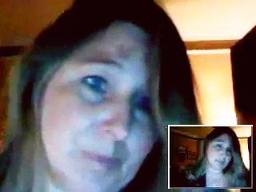 On doing a search for Michelle Wolven, busybody and psycho stalker freak, I have learned that Wolven does not limit her harassment to Dr. Antonella Carpenter and the staff of Lase Med Inc., and their supporters (including Barbara Hartwell).


No indeed, Michelle Wolven has a long history of such harassment, gate-crashing and stalking. This report exposes Michelle Wolven not only as a stalker, but as a bald-faced LIAR, who has made false claims of "assault" against various individuals --just as Wolven continues to LIE, making false claims against Dr. Carpenter, her staff, and supporters, including Barbara Hartwell.


Here (below), I present documented evidence of Michelle Wolven's flagrant and unconscionable dishonesty. But before getting to that, I should mention that in the last week, Michelle Wolven has continued her harassment of various individuals, in connection with her obsessive campaign to destroy Dr. Carpenter and to "shut down Lase Med Inc.".


As exposed in a previous report, Wolven wrote a complaint to the station manager of Orion Talk Radio, libeling Barbara Hartwell, Dr. Carpenter and others, as well as making threats of legal action, though she has no grounds for such. It has since been reported by the station manager, that he has received further "harassing" messages from Wolven, including her angry complaints that he forwarded the message to Randy Simmons, an associate of Dr. Carpenter, which was later published and refuted by Barbara Hartwell.


I really have to wonder, what was Wolven expecting? That the station manager would hush the matter up; that he would not do the right thing by notifying one of the talk show hosts on his network, namely Dr, Carpenter, that she and her associates were being libeled, that threats were made, and that complaints were being launched against her?


If any complaints were launched against me (and they certainly have been), and sent to my friends/professional associates, I would certainly expect them, in good conscience, as a matter of integrity, to NOTIFY me of such a thing.


Michelle Wolven apparently believes that she has the "right" to her OWN "privacy", even secrecy, in a very PUBLIC matter (one that SHE HERSELF has made public), in sending out her libelous messages to the manager of a radio station (while also copying the message to several of her accomplices, including Bob Criscuolo and Bob Babecka, also engaged in the libel/slander/harassment/stalking campaign against Dr. Carpenter --all the while violating the privacy, the personal boundaries, and the fundamental rights of others, with impunity. This is the oh-so-typical double standard adhered to by all aggressors, most specifically in this case, busybody/stalker Michelle Wolven.


In addition, Michelle Wolven has widened the scope of her harassment of known associates of Barbara Hartwell, in her attempts to extract information which is none of her business, and to exert pressure (more aggression) by contacting radio talk host Howard Nema, libeling Dr. Carpenter and pressuring Howard for an "interview" on his program.


As far as I am concerned, there is only ONE appropriate "response" to such an aggressive  busybody: none at all, except PUBLIC EXPOSURE. If her initial efforts at contact (asking for a return call or response by e-mail) are disregarded, as they should be, and she continues to harass, by telephone, e-mail or other means, the aggressor should then be notified ONCE and ONLY ONCE, in no uncertain terms, that she is engaging in harassment and that it will not be tolerated. Period.


Harassment (by any means, telephone, e-mail, etc.) is a legal matter and should be dealt with as such. Once the aggressor has been notified that contact is unwanted and that further attempts at contact are regarded as harassment, if the harassment continues, the aggressor (busybody/stalker) is violating the rights of the Target and breaking the law.


And due to the fact that I do not have a public e-mail address (does anyone really wonder why?), and because she has no way to make direct contact with me, Wolven has continued her libelous postings against Hartwell on public message boards.


Although I have copied any such postings sent to me and saved them as evidence (as I always do), I have no intention of getting drawn into any discussions, arguments or debates with this busybody from Hell. The typical M.O. of busybody/stalkers like Michelle Wolven is to try to get their Targets to engage them in back-and-forth public arguments. He said, she said...then he said, then she said.....


The provocateur will attempt to waste the time of the Target in such a game, and will also recruit other shills, stooges and busybodies to post their own comments against the Target. Another tactic is to conduct public interrogations of the Target, AS IF the Target is "required" to answer questions from a gaggle of aggressive busybodies.


I've got news for Michelle Wolven and her ilk: You are wasting your time, but I have no intention of allowing you to aggress your way into wasting mine.


Wolven continues to make false statements, false accusations against Barbara Hartwell, even making ludicrous efforts at amateur psychoanalysis. But these tactics boil down to one thing: false assumptions presented in the form of unsolicited opinions about people she does not know. These characters also taunt and bait the Target, trying to provoke a response. Well, they won't get one, not from me.


My policy is simple: DO NOT ENGAGE. Do not engage, instead collect evidence and EXPOSE THEM.


Which brings me to other Targets of Michelle Wolven, who have documented her harassment, her attempts to violate the rights of others, to physically obstruct the activities of law-abiding persons, while herself breaking the law.


This particular report comes from APAC, a group that supports "pro-choice".


[NOTE: I am NOT an advocate of abortion, but that is NOT the issue here. The ONLY issue is Busybody/Stalker Michelle Wolven's extreme aggression against private citizens and her attempts to FORCE HER WILL AND HER BELIEFS ON OTHERS.]


Michelle Wolven is described by her Targets as: "White trash with a bad perm",  "the Anti from Hell", and "The Bitch".


Michelle and her husband, often with some of their four children in tow, drive all the way to Atlanta to harass patients and their companions. Michelle's normal tone of voice seems to be screaming at the top of her lungs. She is undaunted by the fact that patients either find her scary or funny; Michelle persists in her belief that she is there to "offer help to women" and that the patients "appreciate her being there." Michelle often accuses the escorts of hitting and shoving her. She also accused one escort, who does not smoke, of burning her with cigarettes. One morning, when I informed another escort that I was going to the car to get my sunglasses, Michelle looked at me and said, "It is the demons inside you that can't stand the sun." Not only does Michelle believe that I and other escorts are possessed by demons, she also claims to have photographs of yours truly in robes, performing pagan sacrifices.


Us escorts must be doing something right, as Michelle wants to get rid of us in the worst way. She started off by calling the police every time an escort looked at her the wrong way. She believes that anyone who stands between her and a client should be arrested.The police would write up their reports, tell everyone to behave, and be on their way.


Michelle later escalated to filing out applications for warrants and dragging us into court. The results are as follows:

Michelle Wolven has also filed false complaints against two Fulton County sheriff's deputies; one of the deputies had arrested Ms. Wolven for trespass and disturbing the peace at Midtown Hospital (case pending).


Seen enough yet? Michelle Wolven, the Busybody from Hell, uses raw aggression, in the form of lies, slander, libel, stalking, false "legal" complaints against Targets. She is an unrepentant LIAR who bears FALSE WITNESS with impunity against anyone who "stands in the way" of her obsessive objectives.


Michelle Wolven is an extreme violator of the privacy, the personal boundaries and the God-given rights and liberties of others.


DO NOT LET MICHELLE WOLVEN GET AWAY WITH HER CRIMES AND CIVIL OFFENSES.


EXPOSE HER, MAKE A FORMAL COMPLAINT TO THE APPROPRIATE AUTHORITIES.


SHUT DOWN THE BUSYBODY FROM HELL, MICHELLE WOLVEN.


For more information exposing Michelle Wolven and her accomplice, Bob Criscuolo, and their libelous false complaints against Barbara Hartwell, see this video:


Will the Real Barbara Hartwell Please Stand Up?