Dangerous to be Right When the Government is Wrong: Barbara Hartwell on Ramola D Reports 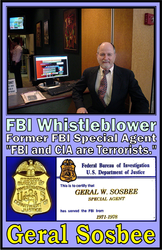 It is dangerous to be right when the government is wrong.

CIA Whistleblower Barbara Hartwell shares articles and affidavits she has published from whistleblowers Richard Taus and Mike Ruppert while we both discuss the current situation of COINTELPRO persecution that FBI Whistleblower Geral Sosbee has lately been reporting to us, and include his recent letter to McAllen Texas City Council officials seeking protection from harassment.

We also discuss certain exceptionally detrimental aspects of COINTELPRO persecution which include character assassination, defamation, and slander, a subject of special import to both Barbara Hartwell and Geral Sosbee and indeed of ongoing import to myself as well.

Please support the candid conversations at this channel by becoming a supporter at Patreon: www.patreon.com/RamolaD, or donate at everydayconcerned.net.

In this podcast I have done readings from the reports of FBI whistleblower Geral Sosbee and also from this report:

The Plight of the Whistleblower: The Richard Taus Case (2010)

Whistleblowers may emerge from the bowels of any corrupt organization, corporation or institution; but perhaps the most dangerous places are government agencies.

Government whistleblowers, by their very nature, are considered "enemies of the state". In a world where governments were honorable, where Liberty and Justice for All was not simply a glib slogan, whistleblowers would be welcomed and appreciated for their service to humankind.

But in the real world of pervasive and institutionalized government corruption, government whistleblowers are targeted for neutralization. At the very least, they are vilified, demonized and ostracized, libeled and slandered until their good names are destroyed.

Plots are hatched against them by the evildoers whose crimes have been exposed. They are persecuted, stalked and harassed. They are set up on false charges and wrongfully and unlawfully imprisoned. And some are murdered, the final solution which will silence them.

And here, from one of the great government whistleblowers, my friend, the late Michael Ruppert.

"But, You Don't Understand, My Case Is Different!"

Advice and Experience for Whistleblowers Looking for Help


A human heart can contain only so much suffering.

To all of the wonderful, courageous victims who have reached out to me I must tell you honestly that if I were to tell anyone's story about years of sacrifice and torment - of pain, disillusionment, humiliation and betrayal - it would be my own. I would do that for no other reason than that I have been at it far longer than any of you have (24 years since 1976) and I have suffered as much as any of you - except the ones who have been murdered like Col. Jim Sabow, or those who have been imprisoned like Bill Tyree and Richard Taus. I am selfish and I want sympathy and consolation for my sacrifice. I want someone to make it better for me too. What I have discovered is that we have to do this ourselves.