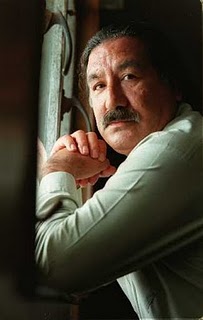 NOTE: I've been a Leonard Peltier supporter for more than 3o years. I have written editorials (including for mainstream hardcopy publications) and  posted many of the newsletters from the activist organizations which are working to free Peltier.
For awhile I took my name off the e-mailing list due to invasions of privacy by 'Topica' (nothing to do with the Peltier supporters), but recently, the organizations have been using another server, and I was able to get back on the list.
I signed the petition for Bill Clinton to grant clemency to Leonard Peltier in 2000, but of course, he failed to do what he should have done.
I was also asked to be a signatory on the V.I.P. list, which I considered a great honor, as it is by invitation only.
See:
http://users.skynet.be/kola/vips.html
http://users.skynet.be/kola/index.htm
We, the undersigned, hereby urge the U.S. President to look into the case of Leonard Peltier. There is sufficient evidence that this Anishinabe/Lakota human rights activist is innocent. In court, the prosecuting attorney admitted that neither the U.S. government nor the FBI have any idea who killed FBI agents Coler and Williams; and the 8th Circuit Court of Appeals decided that the FBI had coerced witnesses, committed perjury, fabricated false evidence, and withheld crucial evidence proving Leonard Peltier's innocence.


We also urge the U.S. Senate / Congress to start hearings into the misconduct of the FBI in thisparticular case. After all, 55 Congress members have already asked former President Clinton to grant Peltier executive clemency.

Furthermore, the Belgian and European Parliaments have each adopted two resolutions with these same demands.


Normally, I would not appeal to Barack Obama for anything, but I must make an exception in the case of Leonard Peltier.  I would do just about anything in my power to see him set free. Since I don't wield any political influence in any sphere, and since I lack the resources to donate funds, all that is left is to continue to do what I can by publicizing the case in the hope that others will be as outraged as I have been, these many years, and stand up in solidarity with Leonard Peltier, for Freedom and Justice.


The Courts may not be able to act but Barack Obama, as President, can. Please join with us to free an innocent man. On February 4, 2012, tell Obama to grant clemency to Leonard Peltier.


Take a few minutes out of your busy day to write to the President, too:

For guidance in writing to the President in favor of clemency, see:
http://www.whoisleonardpeltier.info/clemency.htm

Thank you for all you do on behalf of Leonard Peltier.

The evidence shows that the FBI was the aggressor in the firefight that occurred on June 26, 1975.  From 1973 to 1976, Indigenous People on the Pine Ridge Indian Reservation in South Dakota were victims of beatings, drive-by shootings, and stabbings carried out by local vigilantes who collaborated with the FBI.  Peltier and other Indigenous activists were forced into a defensive posture to protect not only their lives, but the lives of others who were present-elders, women, and children.  Indeed, Mr. Peltier's co-defendants, tried separately, were acquitted on grounds of self-defense.

The evidence also clearly shows that the U.S. government's goal was to orchestrate Mr. Peltier's conviction by any means-including falsifying extradition documents and intentionally committing fraud on a Canadian court, as well as suppressing evidence of Mr. Peltier's innocence during his trial.  By the government's own admission, the critical part of the prosecution's case against Mr. Peltier was the ballistics testimony which, years after his conviction, was discovered to be false.

You can help to free an innocent man.  Learn more about the Peltier case at:
www.whoisleonardpeltier.info.
Barbara Hartwell Percival