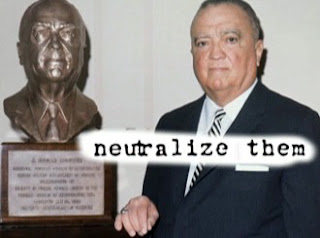 On May 24, 2011, I was interviewed by Sherri Kane and Len Horowitz. Our discussion covered the COINTELPRO (counter intelligence program) by which quite a number of legitimate journalists and whistleblowers have been targeted for neutralization campaigns.
Among the tactics of COINTELPRO, intended to silence and discredit Targets,  are libel and slander, character defamation, designed to discredit the research, investigations and published information of Targets; cyber-stalking, harassment and threats by criminal provocateurs; black propaganda disseminated against Targets and the dissemination of disinformation.
In 2010, Sherri Kane and Len Horowitz identified and exposed some of the criminal perpetrators involved in these FBI/CIA COINTELPRO operations.  Among them were some of the same perps who had targeted Barbara Hartwell for over a decade.
Please take the time to listen to this program, on which we expose the demonic liars, bigots. racists, misogynists and those involved in satanism and child-trafficking, who have made life a living hell, not only for many innocent children, but for anyone with the courage to expose them, to try to stop them and bring them to justice.
The Insight Hour
http://www.bbsradio.com/syncf/The_Insight_Hour/The_Insight_Hour_2011-05-24.mp3
Barbara Hartwell Percival
Legal Defense & Research Trust
PO Box 22
Old Orchard Beach, Maine 04064
Barbara Hartwell Vs. CIA
http://www.barbarahartwellvscia.blogspot.com
Posted by Curriculum Vitae at Tuesday, June 14, 2011