NOTE: Here is the latest in a series of articles exposing a vast criminal network of deep black operations, involving government mind control programs, child sex slavery, human trafficking and satanism.
I have been exposing information on these issues since 1995 (I broke out of CIA operations in 1994) and have been engaged in a battle with these forces of darkness since childhood, when I was recruited against my will into CIA's  black operations through the MK Ultra program.

I survived, and managed to extricate myself from CIA operations only through the Grace of God, a fact which I have stated repeatedly in my reports --but the demonic individuals involved in the criminal cabal have attempted to discredit me in a variety of ways, most often in libelous/slanderous commentaries in print or on radio/video programs, claiming I am a "CIA disinfo agent" and other slurs along these lines.

In 2010, some of the information gleaned from my investigations was included in articles by investigative journalist Sherri Kane, who had more recently been targeted by the same criminal network which had been persecuting me, and which I had been exposing in my reports.
It is important for me to say that Sherri reached her conclusions about these criminals through her own discernment and experience, which fortunately,  happened to be corroborated by my reports.
After reading several of Sherri's reports, I was happy that she contacted me through a mutual acquaintance, another investigative journalist, Janet Phelan, similarly targeted by this criminal network. (I don't have a public e-mail address.)
As for Dr. Leonard Horowitz, the coauthor of this article, I first met him in 1998, when he and I were both speakers at the Global Sciences Congress in Daytona Beach, Florida.
As I told Sherri in a private (well, as private as it can be, with the government spooks always listening in on the phone lines), back then, I never thought I'd see the day when I would be exposing a satanic network, including my former friend and professional colleague Ted Gunderson, and that Dr. Horowitz would become my ally in this endeavor.
It's strange how things work out, but in any case I am grateful for the efforts of Sherri Kane and Len Horowitz to expose this criminal network --especially since I have had very little backup over the years-- the most notable exception being my dear friend, former FBI agent Geral Sosbee, another target of the FBI/CIA criminal network, who has stood up for me over the past decade and never wavered in his pursuit to expose the truth and to see justice done.
On Tuesday evening, May 24, I had the pleasure of being a guest on Len and Sherri's radio program, The Insight Hour. On this program we discussed the same criminals exposed in Len and Sherri's article.
http://www.bbsradio.com/syncf/The_Insight_Hour/The_Insight_Hour_2011-05-24.mp3
Please take the time to listen to the radio show, and to read the corresponding article by Sherri Kane and Dr. Leonard Horowitz.
May the Light of Truth and the Grace and Peace of God be with you.

Barbara Hartwell Percival
May 26, 2011
CHILD-TRAFFICKING & SEX SCANDAL EXPOSES CIA/FBI JUSTICE DEPARTMENT COVER-UP OF CRIME NETWORK
http://web.mac.com/len15/WAR_on_We_The_People/CHILD_SEX_SCANDAL__CIA_FBI_COVERS-UP_CRIME_NETWORK.html
PERSONAL MESSAGE FROM DR. LEONARD HOROWITZ
Dear Healthy World Member,
Below is BREAKING NEWS that I have LINKED HERE in case you prefer to read this most urgent publication on a web page, and refer others to it.
You will find this article is the most shocking expose I have contributed in three decades of journalism.
This report is co-authored by Sherri Kane, who I thank for opening my eyes up to the story you are about to read, and for actually helping to save my life through her investigative reporting. Sherri, recently credited by Jesse Ventura for her research into the Gulf Oil sabateurs, is lifting the veil over the entire conspiracy industry with this publication.
The main reason I am mailing you this foreword is because most Healthy World Members feel uncomfortable about this "negative" subject matter. We often hear the opinion that I am either wasting my time engaging the "dark side," or getting myself into trouble with the "forces of evil."
Frankly, I am a humanitarian, credited worldwide for numerous works detailing the "dark side" of BigPharma's biocide, depopulating humanity through vaccination toxicity, and poisoning our planet unconscionably. By so doing, I have helped millions of families save their children's lives.
I have a calling on my life that is different from most people's. My ministry, that oversees our companies, is dedicated to educating people about the world's best news (i.e., natural healing and 528Hz "medicinal music"), as well as the world's worst news--how spiritual suppression and petrochemical-
pharmaceutical pollution is risking humanity's extinction.
So I pray you will forgive me, and HealthyWorldStore.com, for any discomfort you may feel from receiving and reading this article.
Just so you know, my personal preference is to always "focus on the light." But when God calls me to investigate and report matters that may save children, or our planet, I am compelled to put my personal preferences and financial concerns aside to heed the call to the best of my ability. I would be a hypocrite if I focused exclusively on the "good news," neglecting brothers and sisters worldwide impoverished, sick, and dying from suppressed truths that could set everyone free from these preventable maladies. I would be a coward if I ran from corporate-controlled law-makers, their criminal enforcers, and agent provocateurs. I would also be a hypocrite for neglecting life-saving "bad news" with my philosophy that, "You can't achieve optimal 'enlightenment' without coming to terms with the depths of the 'darkness.'"
I would be unfaithful fearing anything, even death, knowing the Divine Source of my assignments. It is wise to shine light, knowing darkness cannot stand in it. And, I would not be a reputable healer or physician if I neglected the importance of diagnosis--that means to "see through to know" the root disorder, since without proper diagnosis, effective treatment(s) cannot be chosen or applied.
The following article diagnoses the main reasons why there is so much trouble in America, the main parties involved, and why people have become too dysfunctional--frightened and confused--to actualize solutions.
The parties involved, identified in this article, claim that Sherri Kane is my "handler," an "agent for the Mossad," or "working for MI6," destroying my credibility, or planning to assassinate me. Those claims are ridiculous, given the fact that my partnership with Sherri has consistently blessed my personal life and career, and are being made maliciously and exclusively by the same critics that began libeling and defaming me two years before I met Sherri in 2009.
I, therefore, pray you will receive this contribution by Kane and Horowitz with an open mind, loving heart, and strength of will to transcend your present fear and confusion generated by the trouble-makers/mind-manipulators, using this article as a learning reference, thus, electing to free yourself and others from the "conspiracy of silence" that is the main problem preventing solutions from being successfully implemented globally.
And please, after you read this article, pass it on to others, post it on the Internet, and mail it to Acting Inspector General of the Justice Department, Cynthia A. Schnedar, along with your diagnosis and proposed treatment.
With much LOVE in 528,


Dr. Leonard G. Horowitz, DMD, MA, MPH, DNM, DMM
Overseer, Managing Member
Healthy World Distributing, LLC
Opening Excerpt:
Los Angeles--Shocking proof has surfaced to indict a former FBI Division 5 director for lying about his marriage to Church of Satan heiress, Diana Rively, Anton LaVey's ex-wife, to keep a secret child-trafficking sex-slavery network hidden.
The revealing document threatens to shake-up the Justice Department with many questions as to why the FBI, working with the CIA, has been unable to stop a network of child traffickers from kidnapping, raping, and sexually enslaving hundreds, possibly thousands, of American children annually.
In the handwritten letter, recovered from 1998, Ted Gunderson, a retired FBI/CIA official and informant on matters of a satanic network of pedophiles and child traffickers wrote, "The marriage [to Diana Rively] . . . didn't work out. It only lasted 2 and one half weeks and I left. It would have been a catastrophe to stay there. Nothing against Diana."
The letter, signed with kisses and hugs, was sent to Gunderson's professional associate, Barbara Hartwell, who was programmed to serve in the CIA's psychological operations unit. She trained in psychological profiling and in debriefing military and intelligence personnel, and later toured with Gunderson to "disseminate intelligence on government corruption," according to Hartwell. Their assignments included a child-trafficking operation linked to officials of the CIA, U.S. military, Church of Satan, and Justice Department. 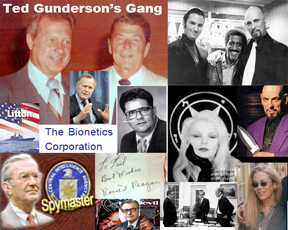