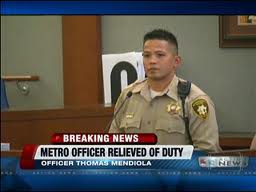 "There are two enemies of the People: criminals and the government. Let us bind the second with the chains of the Constitution, so that it does not become the legalized version of the first."


NOTE: It did not surprise me in the least to learn of this criminal activity by Las Vegas Metro cop Thomas Mendiola. After all, what else can be expected of someone who would gun down an innocent man, then perjure himself in a public inquest?
While watching the Coroner's Inquest following the fatal shooting of Erik Scott, I closely observed Mendiola on the witness stand. He might as well have had the word LIAR tattooed across his forehead. Aside from this, the dead eyes of an unrepentant stone-cold killer told me all I needed to know.
But consider the irony of this situation: Mendiola shoots a man because of a 911 call by a Costco employee, Shai Lierley, who reported that Erik Scott was carrying a gun. So what? Erik Scott, a law-abiding citizen, had a PERMIT for that gun, and it was issued by the very police department whose officers were sent out for the purported "life-threatening emergency" (9-11).
In truth, Erik Scott was a threat to no one, most certainly including the police who were deemed "justified" in what Erik's father, Bill Scott, has accurately called "the Coroner's Cop-clearing Circus".
But in that same summer of 2010, Thomas Mendiola was engaged in nefarious dealings with a known criminal, a repeat offender (presumably a predicate felon), in full knowledge of the fact that he was not only breaking the law, but providing the means (the gun) by which additional crimes  against persons would likely be committed.
Great news that Mendiola has been relieved of duty without pay (at least for the time being). One less killer cop on the streets. And I do hope he ends up behind bars, that is surely where he belongs.
But if justice were truly to be served, he and his accomplices (William Mosher and Joshua Stark) would be doing hard time for nothing less than MURDER ONE.
Barbara Hartwell Percival
February 9, 2011
Officer Involved in Costco Shooting Faces Felony Charge
LAS VEGAS -- District Attorney David Roger says 23-year-old Thomas Mendiola is in a lot of trouble.
Last summer, Mendiola, a Metro Police officer, allegedly gave a .22 Ruger to his mechanic Robert Justice. Justice already had a criminal record in another state. On September 14, 2010, Justice sold the Ruger and a .357 handgun to an undercover police officer for $500.
According to the criminal complaint, Justice told Mendiola about his criminal convictions and Mendiola admitted to knowing about them. According to the complaint, Mendiola allegedly told Justice, "Dude, you're not supposed to have that, but you already know that."
Investigators also say Mendiola stated the gun "was rusted, it had no sights. It didn't fire. Course, I never tried it. It just didn't look like it even fired to me at all."
If convicted, Mendiola could trade his badge for a prison ID.
"Officers should know the law, should know they can't give a convicted felon a firearm," Roger said. "I can't comment on the facts of the case, but the charge… it involves giving someone a firearm who legally cannot posses a firearm."
"It's disappointing anytime someone who's charged with upholding the law breaks it," Roger said.
Both Mendiola and Justice have seen their names in the news before. Mendiola was in court last fall, when he testified in the Erik Scott coroner's inquest. Mendiola was one of several officers found justified for the shooting death of Scott at a Summerlin Costco last year.
"I don't think that his involvement in this case had any bearing on whether or not they were justified in shooting Erik Scott," Roger said.
As for Justice, he is also charged for conspiring with former Metro Officer William Webb to kill Webb's girlfriend Nancy Quon. Webb and Quon, a local attorney, allegedly hatched the scheme so Webb could collect the insurance money from her death. Police say Webb tried to get Justice to obtain drugs he could use to kill Quon. Undercover officers then set up a sting operation to catch and arrest Webb.
Quon is a possible target in an FBI probe into fraud involving Las Vegas homeowners associations. Justice is cooperating with police in that case. Justice and Webb are awaiting trial on counts of conspiracy to commit murder, conspiracy to violate the Uniform Controlled Substance Act and trafficking in a controlled substance.
So far, there is no evidence indicating the cases against Webb and Mendiola are related.
If convicted, Officer Mendiola could spend 10 years in prison and/or pay a $10,000 fine.

Metro is expected to conduct an internal investigation once the criminal proceedings against Mendiola are finished. Mendiola has been with Metro since March 2009.  He has been relieved of duty without pay. His court date has been set for February 24.
***********************