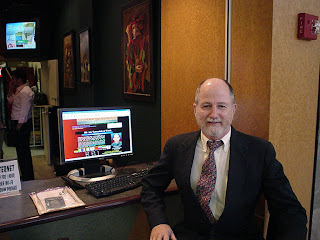 NOTE: I have maintained a personal friendship and professional association with former FBI agent Geral Sosbee for the past decade.
As someone who has worked as a profiler and intelligence analyst (among other areas of expertise) in psychological operations, I can say with no reservations that Geral Sosbee is one of a kind. I have personally debriefed Geral and have listened to many, many hours of his testimony. I also have collected a large file of documents which I have studied and assessed.
In my experience, Geral's statements (in writing and in personal discussions)  have always been truthful and consistent. In fact, given the level of persecution, harassment and outright torture (some of an utterly bizarre nature) for which he has been targeted, it amazes me that he has been able not only to survive it, but to continue to expose the atrocities  perpetrated against him by the FBI and CIA criminals and terrorists.
Make no mistake --they are terrorists, nothing less!


His perceived "crimes"? Defending the United States Constitution against all enemies, foreign and domestic. Refusing to participate in FBI corruption. Being one of only a few good guys in a nest of vipers. Refusing to compromise his principles or compromise with evil.
For these virtues, he is pursued by the FBI/CIA Hounds of Hell!
Here, some links to reports sent to me by Geral Sosbee, which elaborate on his background and detail the neutralization campaign being waged against him.
I ask that the readers consider these reports with an open mind and a compassionate heart.
Thank you for your consideration.
Barbara Hartwell Percival
February 22, 2011
I was an attorney in El Paso, Texas,  when the fbi began an extensive campaign to ruin my career and to train wreck (& hijack) my life.
http://www.texasbar.com/am/template.cfm?section=Find_a_Lawyer&Template=/Customsource/MemberDirectory/MemberDirectoryDetail.cfm&contactid=187722

*The data on my service to the USA (including the fbi) is summarized by Barbara Hartwell at:
http://www.sosbeevfbi.com/targetedforterro.html

My service to the army is documented here:
http://www.sosbeevfbi.com/geralsosbeearmyf.html

I wrote an affidavit summarizing the fbi's efforts to neutralize me here:
http://www.sosbeevfbi.com/affidavit2007.html

Apparently the fbi works with other USA federal agencies
http://www.sosbeevfbi.com/non-consensual.html
to profile individuals as criminals or mental cases who pose a threat to society; the fbi in order to silence me somehow managed to mold the profile around me.

Currently the 24/7 surveillance, both electronic and physical, continue with home invasions, destruction of property, mind games and psychoelectronic assaults. The program is a blanket of harassment and mild torture via sleep deprivation.
http://www.sosbeevfbi.com/hightechassau.html
I have no reasonable expectation that the fbi agenda against me will stop; my life today is dedicated to reporting the extremely painful life thrust onto me by the criminals in the fbi. Congress and the courts ignore my pleadings for about a decade, even as the atrocities continue.
http://www.sosbeevfbi.com/lettertosenatorg.html
http://www.newciv.org/nl/newslog.php/_v194/__show_article/_a000194-000201.htm