TAPS Memorial to Erik B. Scott 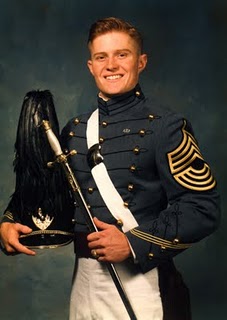 The latest issue of TAPS, a publication printed by the U.S. Military Academy's Association of Graduates, features a nice memorial to Erik. It includes inputs from several '94 classmates, and ran with Erik's official West Point photo.
SPRING / SUMMER 2011 TAPS 187

Erik Bert Scott was born at Mather AFB, Sacramento, CA, on 23 Apr 1972 and was killed in Las Vegas, NV, on July 10, 2010, at the age of 38.
From his earliest days, Erik was an energetic, bright, charismatic boy who loved life and lived it to the fullest. He came from a long line of U.S. military veterans and had a natural affinity for the uniformed services. At a young age, he wore a toy World War II-style helmet daily, had an astounding knowledge of weapons, and played “Army” for hours on end. His family joked that Erik was the only kid in the neighborhood wearing camouflage diapers! Erik also was a talented artist, who drew detailed pictures of soldiers, tanks, and elaborate high-tech weapons of his own design. Later, as a cadet, he created a number of clever spirit posters.
As students in an eighth grade Gifted and Talented Education class, Erik and a friend, Jeremy Gocke, vowed to attend West Point. Both received multiple appointments and arrived at the Point in June 1990. At the time, Erik was a literal eating machine. He was so concerned about getting enough to eat as a plebe that he joined the 150-pound football team, which ate at special tables excluded from routine mealtime harassment by upperclassmen.
There is no question that Erik was an extraordinary soldier and leader. More importantly, however, is the memory of him as a shining human being and loyal friend. His chronic optimism was contagious. Throughout Beast Barracks, Erik always appeared to be contented. The image of Erik whistling quietly and cleaning his weapon, after marching back from a wet and miserable week at Lake Frederick, is indelibly etched in our minds. Even 20 years later, we remember Erik as positive and cheerful.
As a Plebe, Erik’s prominent red hair made him an easy target for upperclassmen roaming the halls of Sherman Barracks. Those copper red locks also became Erik’s vehicle for rebellion against A-1s upperclassmen. Erik’s team leader recalled that the redheaded Plebe’s hair length was a frequent topic of discussion. Erik couldn’t bear to part with those copious red locks, so he became an expert at disguising their true length. It became somewhat of a game between Erik and his team leader. Often, he would report for formation to find his team leader, ruler in hand, ready to measure the length of Erik’s hair. Despite the “mane rebellion,” Erik rose to the challenges of Plebe life and soon gained the respect of upperclassmen throughout his company.
Erik was a “striver” in everything he did. He possessed such intensity, focus and determination to accomplish his goals that books could and should be written about them. Erik constantly encouraged those around him, spurring them to greater physical and mental achievements. On one occasion, following a grueling leg workout in the gym, Erik challenged a classmate to race back to the barracks. They had to descend three flights of stairs and sprint approximately one quarter of a mile to Sherman Barracks. Erik lost that first race by mere feet. Undaunted, Erik issued a second challenge two days later. This time, to gain an edge, he executed a perfect dive-roll off the last flight of stairs, from about 15 feet. His classmate stopped, stunned and in total amazement at what he'd just witnessed.
He lost that rematch race. A few minutes later, he found Erik, already showered and immersed in evening studies, wearing a bright smile. “Success, backed by a warm, humble smile,” is how Erik will be remembered.
Erik Scott will always be one of those rare souls who “walks in the light.” Everybody fortunate enough to know Erik is better for it. He saw the best in each person and every situation. Erik was a loving, successful man who wanted to pull everyone up with him, and did.
Erik graduated in the top 10 percent of his class and was commissioned a U.S. Army officer in May 1994. After Officer Basic training at Ft. Knox, KY, he served as an M1A2 tank platoon leader and on company staff with the 1st Cavalry, stationed at Ft. Hood, TX. During his first deployment to the National Training Center, Erik received a commendation for employing an innovative tactic. When his platoon was being targeted, he ordered several tanks to fire their massive 120-mm cannons at a partially concealed OH-58D Kiowa Warrior spotting for the opposition force, quickly eliminating the aerial threat.
Erik voluntarily left active duty through an early-out program prompted by the post-Cold War military drawdown and embarked on a successful career in medical and real estate sales. In 1999, Boston Scientific transferred him to Las Vegas, where he served as the area’s cardiovascular sales representative. While working full-time, he obtained a master of business administration from Duke University’s Fuqua School of Business, then branched into high value real estate sales.
He obtained a number of commercial real estate certifications and was appointed sales director for One Queensridge Place, a twin-tower complex of multimillion dollar luxury condominiums in the prestigious Summerlin community. With partners, he set up Empire Development Group and was
involved in a number of major projects in the Las Vegas valley.
In 2009, Erik returned to Boston Scientific, serving as a pacemaker and de- fibrillator sales representative for the company’s Cardiac Response Management unit, until his untimely death.
Erik was a special breed of American, an excellent, reliable leader, ultra-loyal son, brother and friend, and a staunch, uncompromising patriot devoted to his nation.
When we see Erik again, may he take pride in the fact that we lived our lives as he did—with passion, intensity and fierce loyalty for family, friends and country.
—Written by the Class of 1994 & his family