Former FBI agent Geral Sosbee was forced to retire from the FBI in 1978, after only seven (7) years of service. He was targeted while still inside the FBI because he refused to "go along to get along" with the corrupt practices, refused to "play the game"; because he was true to his oath to defend the Constitution; because he defended the God-given, unalienable, constitutionally protected  rights of ALL, including suspects.


But Geral Sosbee did not back down after he was forced out of the FBI. Instead, he became a whistleblower. As a result he was targeted for even worse persecution, still ongoing to this day.


Geral Sosbee is not just any whistleblower. He is the primary whistleblower  ever to come out of the FBI, and certainly the most controversial. He reports the atrocities --in detail-- that nobody else formerly in FBI service will cover: mind control tactics; electro-magnetic antipersonnel weaponry deployed against Targets; implants placed in the bodies of some of the FBI/CIA agents (which both Geral and I have had inflicted on us); chemical/biological warfare tactics used against Targets; synthetic kidney stones; psy war tactics, and on and on it goes....

Targets are legitimate whistleblowers, those who actually KNOW what they are talking about, and have been INVOLVED in the operations they are exposing. Or, they could be legitimate professional journalists who are actually in possession of accurate information which the government does not want exposed.


[See reports on this site for names of these government stooges.]


The late Ted Gunderson, FBI Chief and COINTELPRO Kingpin, exploited a large network of these COINTELPRO minions, who continue their attacks on genuine whistleblowers, journalists and activists.


Geral Sosbee has documented the fact that at the time he reported FBI crimes, before he was forced out, Ted Gunderson was Chief Inspector, but IGNORED Sosbee's reports and did nothing at all in response to his legitimate complaints.


Geral Sosbee also told me in 2001, when he and I first began working together, that Gunderson had made an approach to him, trying to get Geral "on board" with him to "expose" government corruption. When I heard this, I said, Stay away from Ted Gunderson!

A few days ago, I had a telephone conversation with Geral, in reference to a report he had written which was repeatedly tampered with and even deleted from certain websites where he posted it. So I am reposting it here.

The subject is clandestine murders by FBI and CIA. The fact that most of these murders are not even designated as homicide is the worst problem. And then, when Geral tries to alert the public to what is really going on, that the government is killing people in their secret operations and getting away with it, the minions of FBI and CIA come out of the woodwork to harass and stalk him in cyberspace.

These thuggish characters try to discredit Geral Sosbee's reports, by calling him "stupid" or crazy. Most hide behind pseudonyms, and being cowards, never use their real names in their attacks. And even though the subject matter is deadly serious, whenever we get to talking about these creeps, we end up mostly laughing about their transparent idiocy.

Below Geral's article, which consists of links to various reports, you will see just a few of the comments posted by some of these FBI/CIA minions. In particular, a Mr. J. Robert Upton.


Mr. Upton, if you are the best the government rat bastards have in their stable of cyber-stalking provocateurs, they are surely in trouble.  And by the way, does your mother know what you do for a living? Why don't you get yourself a real job, something that would make your mother proud of you. Try being a man for a change, instead of a pathetic little government flunkey. Shame on you, Mr. Upton.

The central question of our time is to determine how many people globally have been murdered by fbi/cia operatives in covert, illegal, counterintelligence programs, etc., by methods (among others) described in the links below.As the crime of murder has no time limits for court prosecutions, we must prosecute the criminals in the fbi/cia who are responsible for the crimes suggested herein.

Where you been sosbee, I figured that your ass had been committed to the nearest mental institution, which is certainly where you belong.

So, perfect posting sosbee, illiterate and stupid as a box of rocks didn't just leave a word out of his narrative, the fbi hacked it and deleted the word. LOL, you stupid fuck, do you really think that the fbi gives one rats ass what some loony fucker like you posts? Get over yourself you fucking moron, and get some mental help, because you sorely need it.


The cyber stalker here may be a serial killer. His diction offers a hint of his lunacy.

To peek into the mind of delusional stupidity just follow any link to gerbils blog. You will find a huge collection of the stupidest shit ever written. Hey sosbeemoron, want some cheese with that whine. Fucking crybaby whines about being controlled by the fbi, but the first thing the idiot does is run to the cops to report that the bad ass J. Robert Upton is commenting unkindly to his posts and he wants me prosecuted. LOL Fuck you sosbee.

If you have more evidence of Upton being a stalker than I see here, then it's okay to call him a stalker. Based on the evidence I see here, he shouldn't be referred to as anything more than a critic.


Well Erm- I don't recall asking your opinion on any subject; your friend (the coward j robert upton) whom you pretend to defend exemplifies all that is ugly, corrupt and evil in our culture and in our government. You are now permanently associated with his filthy and homicidal mind.


I was simply pointing out that since y'all are both making use of a public forum, he's not following you around in any sort of legally actionable sense. He's doing nothing to violate your privacy. Is he being mean and nasty towards you? Sure, but that doesn't make him a stalker, it just makes him a critic.


The fbi/cia/police have a simple message for the Target
WE INTEND TO: 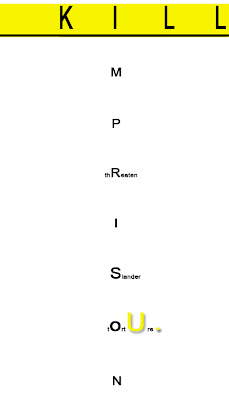